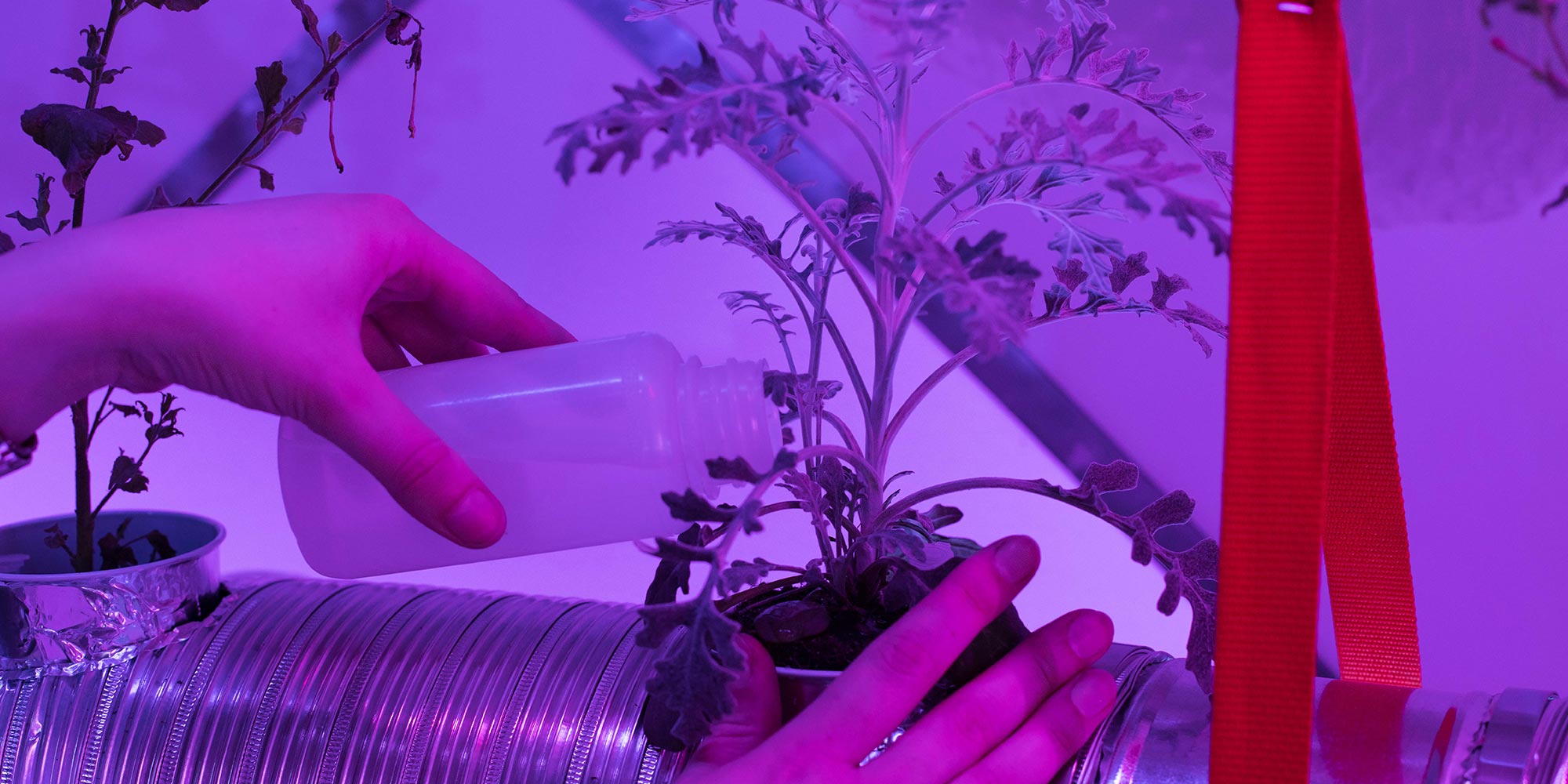 Data Garden is an organism-based data centre. This functional carbon negative data infrastructure is capable of storing and retrieving data from the DNA of plants. In stark contrast to the carbon emitting data cloud, Data Garden works with data in nature’s way, storing data in plant DNA, within organisms that create their own energy. It uses Nanopore sequencers to retrieve data from the plants’ DNA in almost real-time.

The project offers a vision of a world in which design is a collaboration between species, ecosystems, and technologies. As an interactive piece, developed for SXSW, it brings the public into contact with advanced biotechnology as well as critical issues of ‘Data Warming’ (a term coined by GYOC to describe the link between carbon emissions and data storage), genetic modification, and synthetic biology. These are presented through visualizations and a series of posters that accompany the installation.

Developed by Grow Your Own Cloud and scientist Jeff Nivala, principal researcher at MISL, University of Washington, the installation features tobacco plants and Arabidopsis encoded with curated data related to Data Warming using in vivo DNA data storage techniques. The encoding process involved converting computational data such as JPEGs and MP3s into DNA, using ATCG rather than binary. In order to retrieve the data, samples from the plants are taken to obtain droplets of liquid DNA, which are decoded using a nanopore sequencer. Decoded read-outs are then fed into TouchDesigner via Python, revealing the data stored within the plants.

Working with nature to respond to the threat of Data Warming, Data Garden invites visitors to experience a new materiality around data, and explore a world in which data storage is truly green. This type of organism-based data centre is designed to inspire new models that bring principles of working with nature to data, creating regenerative data ecosystems.

With support from: Unlisted Projects (US), The Museum of Human Achievement (US), Statens Kunstfond (DK), Roskilde Festival (DK), Catch (DK), and The Singer Foundation (US).

Special Thanks to Majken Overgaard, Zac Traeger, and Dianne Dain

Grow Your Own Cloud (GYOC) explores alternative relationships with nature and technology through collaboration between the arts and science. By storing data in nature’s way, in the DNA of plants, GYOC creates carbon absorbing data storage. Initiated by Monika Seyfried (PL) and Cyrus Clarke (UK), the research investigates data, living systems, and planetary issues such as ‘Data Warming.’ GYOC works with scientist Jeff Nivala (US) to re-imagine the cloud as a space for symbiosis between humans and other organisms. GYOC has been exhibited at SXSW, Primer NYC, and BIO26. They contributed to the agenda of the UN Climate Summit, COP25, and WEF Davos. In 2020 they were awarded the Ginkgo Creative Residency.

Global energy consumption of data centers is a huge issue for the global environment. Data centers are emitting as much CO2 as the aviation industry, and these numbers are growing exponentially. Data Garden is an organism-based data center, a carbon negative data infrastructure that can store and retrieve data from the DNA of plants, using organisms that create its own energy. Through this project, the Grow Your Own Cloud team aims to build an organic cloud that emits oxygen rather than CO2. From speculative research working with local flower shops to be transformed as decentralized data centers, to working with researchers at the University of Washington, actually converting computational data such as JPGs and MP3s into DNA. Data Garden and its installation inspires the audience regarding how humans may be able to work with nature and data, creating regenerative data ecosystems.