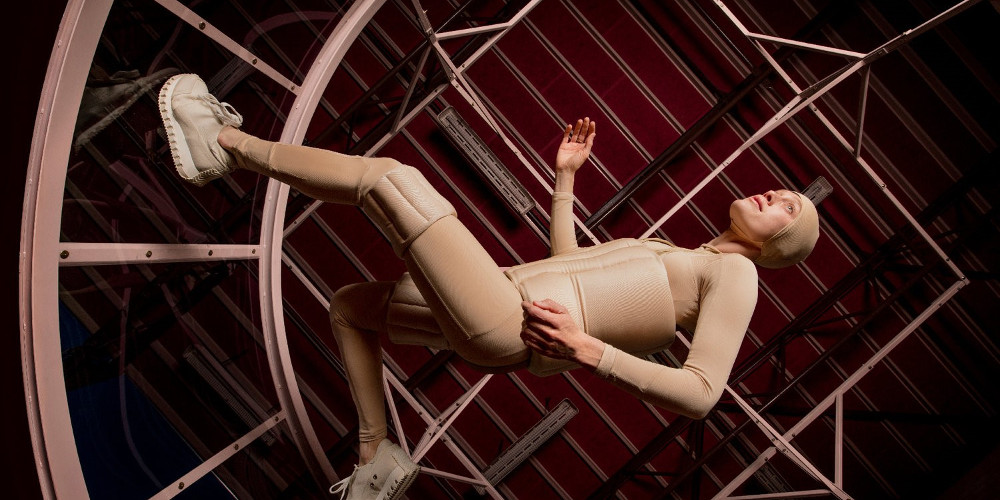 The Institute of Isolation is an observational documentary that contemplates whether isolation; or more broadly speaking, extreme experience, can be used as a gateway to training human resilience.
Set in a near future reality this fictional organization is a research and training ground, offering alternative methods to condition the body and adapt fundamental aspects of human biology.
The film references genetic engineering, space travel, sensory deprivation, and the changing relationship the body is forming with technology. “If one can be resolved in an environment of isolation, we can more quickly adapt and be buoyant when faced with the kinds of things we may overlook, once we’ve departed Earth’s edge.”
McRae (the protagonist) moves through a series of sensory chambers spending time in an anechoic chamber examining the psychoacoustics of silence or in a self–invented microgravity trainer conditioning the body for possible life in space. These fictional locations are used to make architectural inquiries into the role buildings could have on altering human biology on an evolutionary scale.

Lucy McRae (UK/AU) is a science fiction artist who straddles the worlds of fashion, technology and the body. Trained in classical ballet and interior design her interdisciplinary work centers around the body. She combines storytelling with science to create speculative artworks. Her provocative and often grotesquely beautiful imagery suggests a new breed: a future human archetype existing in an alternate world.  McRae encourages scientific conversation regarding the future of health, beauty, and science and provides a feminine point of view on emerging technology. She has spoken at international events, recently at MIT’s Being Material conference on wearables, and her award-winning science fiction artwork has been exhibited worldwide.

The jury recognized that the work of Lucy McRae has been successful in capturing the public’s attention. Her movies reference genetic engineering, space travel, sensory deprivation, and the changing of the human body in relationship to these scientific advances. Although fictional and clearly an artist’s vision, what is particularly striking about her films is the obviously deep and serious research that goes into the development and creation of the work. Here is an example of artwork that functions as many science fiction authors have—as visionaries that later inspire scientists to manifest the ideas into reality—making what seemed impossible at the time possible. In the Institute of Isolation, the artist addresses issues of our bodies and minds being slowly conditioned to a new set of possible existences—on other planets, with different sensory experiences. Inspired by the book, Evolving Ourselves in which the authors claim that we are not subject to Darwinian notions of evolution by nature but by our choice, she produced a film that is in-between science fiction and hard science—a quite possible future scenario. This vision may prove to be of interest to those who are envisioning travel and life on other planets or even how we may have to change to survive the environmental destruction of our own planet. This project was sponsored under the aegis of the EU-funded project SPARKS.