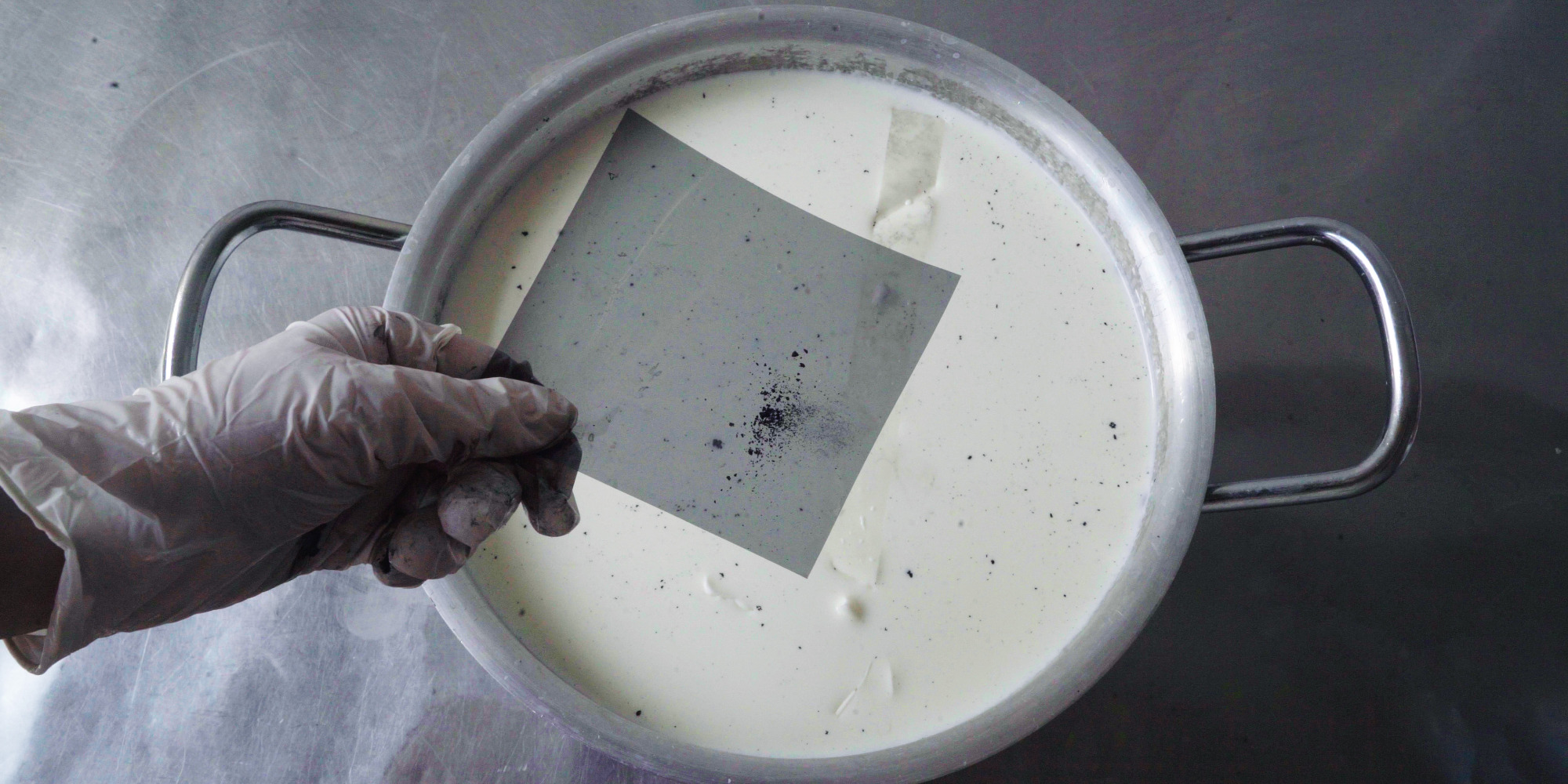 Responding to the housing crisis in Ireland and London, Spoiled Spores is an installation of up to 25 toxic cheeses made with a culture of toxic black mold sampled from rental accommodation in Dublin and London. Corroon comes from Ireland where the housing crisis is arguably one of the biggest social economic issues facing the country. The cost of purchasing accomodation in Dublin has risen by 90% since 2012, whereas wages have only increased by 18%. Consequently the number of homeless families has increased by 216% since March 2015.

Spoiled Spores examines the extortionately priced housing that tenants are forced to endure and juxtaposes this with the manufacturing of high-end artisanal commodities for middle and rentier class consumers. A poisonous trap for the landlord perhaps? Participants were found through the artist’s extended network of peers and call outs online for those who lived in rental accomodation with damp issues. For a year Corroon scraped numerous forms of mold from dank walls and ceilings in London and later in Dublin. Perfectly aged, these apparently high end luxury cheeses are one of a kind, each with an ingredient list including the rental cost, and uniquely named after corresponding tenants, Katie, Alan, Sophie etc. Upon entering the installation, viewers are hit with the nauseating stench of the festering cheese, which is layed out in industrial fridges that hum like loud baritones. Simultaneously alluring and repelling, scent is used to toy with notions of taste and its relation to class whilst also presenting a bodily communication between the abject truckles and the viewer. Drawn in by ideas of cheese boards and seasonal condiments, Corroon’s narrative short film reveals the production process and the unexpected and deeply disturbing backstory, the provenance of the molds. This adjacency(? Meaning unclear) lures us into an apparent cheese mongers, only to reveal a commentary on the living conditions, including her own, where mold samples have been taken as the basis for these supposed Camemberts and Gorgonzolas. 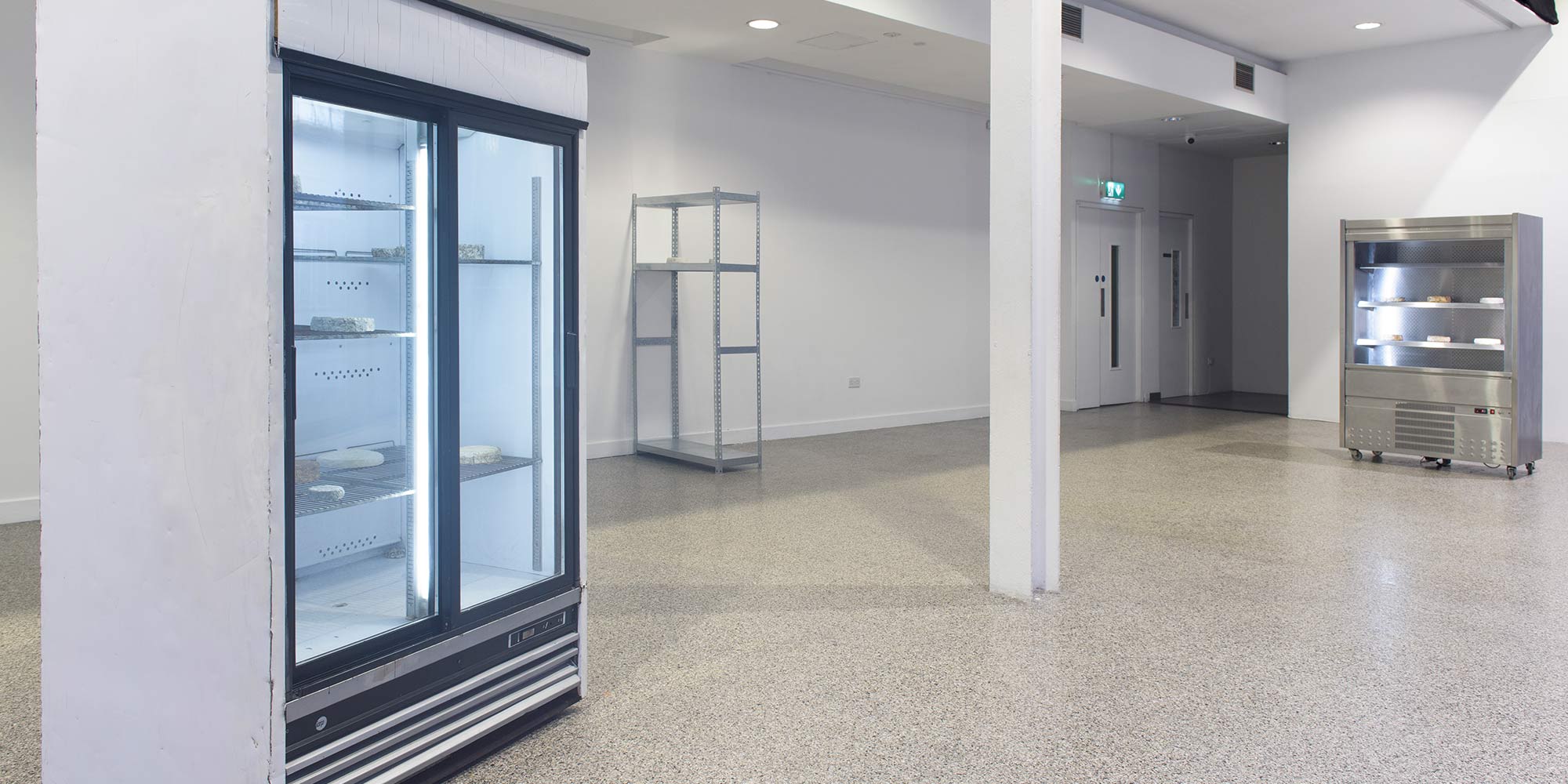 This project was made possible with the participants and many hands:
Alan, Charlie, Donal, Emma, Eimear, Jazbo, Katie, Louis, Ruzha, Ross, Selwen, Stephen and those who wish to remain anonymous to protect their tenancy.

Spoiled Spores was exhibited in 2019 as a solo exhibition of the same name at the LAB Gallery in Dublin, curated by Sheena Barrett. Previously it was exhibited at the 2019 Goldsmiths University MFA Degree Show where it was awarded the Goldsmiths MFA Award with Acme Studios in London.
The film Spoiled Spores is in the collection of Arts Council Ireland.
This project was partially supported by Westmeath County Council, Ireland.

Avril Corroon (IE) works with moving image, performance, sculpture, and food to explore situations where precarious conditions have become every-day. She re-presents these instances in a satirical and absurdist form through juxtaposition and elaborate visual narratives. Such examples include: a video examining “The Landlord” as monster, and covertly filming staff treatment in the service industry where she works. She graduated with an MFA from Goldsmiths University in 2019 and a BA from NCAD in 2014. She has exhibited and screened work in Ireland and London, as well as participated in residencies in the Netherlands and Basque Country.

Spoiled Spores is an artistic provocation on the topic of the housing crisis in Ireland and the UK. In the latest estimate, the UK requires 1 million homes to provide everyone with worthy living conditions. Within the rental community the standard of home is often so poor that toxic mold is commonplace.

Corroon harvests mold from properties in the UK and Ireland from which she crafts a range of artisanal cheeses. The various cheeses are exhibited within industrial fridges that resemble the buildings from which the mold was harvested. The critical aspect to the work is that the cheeses are toxic—they are poisonous to consume and present a real health hazard, as does the mold from which they are harvested.

The housing crisis has placed even more stress on rental communities during the COVID-19 pandemic and this issue will grow as more people move to urban areas and “mega cities” of the future. Spoiled Spores is an excellent example of the role art can play in provoking thought and action. It looks at a social issue from a new perspective. Not only does it look at a problem of today, it also addresses an issue of growing concern for the future.