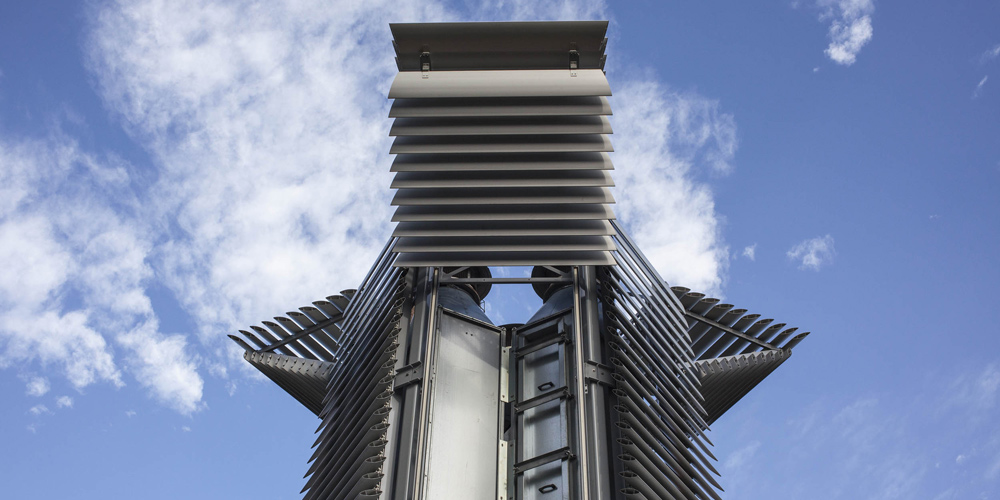 The Smog Free Project offers a journey through innovation, as an experience of a clean future and a local solution for parks and public spaces. It consists of the largest outdoor vacuum cleaner in the world, the Smog Free Tower, and Smog Free Jewellery, made from its captured smog.

The 7-meter-high Smog Free Tower, opened last fall in Beijing, is the largest air purifier in the world which creates a local solution for citizens in parks to experience clean air for free. It cleans 30.000 m³ per hour via patented ozone-free ion technology and uses a small amount of green electricity. It efficiently captures and collects up to 75% of PM2.5 and PM10 airborne smog particles and releases clean air around the tower with a 360-degree coverage creating an almost circular zone of clean air in its surrounding.

The Smog Free Project is a part of Roosegaarde’s larger oeuvre Landscapes of the Future, which connects people, technology, and space to improve the quality of daily life in urban environments.

The Smog Free Project was made possible with the kind support of the China Central Government, Embassy of the Kingdom of the Netherlands in China, Win World, City of Rotterdam, Stichling Doen and Port of Rotterdam. The Smog Free Project is developed by Daan Roosegaarde in collaboration with the engineers and designers of Studio Roosegaarde, ENS Technology and early advisor Ursem (till 2013).

Artist and innovator Daan Roosegaarde (NL) is a creative thinker and maker of social designs which explore the relation between people, technology, and space. Roosegaarde has been driven by nature’s gifts such as light-emitting fireflies and jellyfishes since an early age. His fascination for nature and technology is reflected in his iconic designs such as Smart Highway (roads which charge from sunlight and glow at night), Waterlicht (a virtual flood) and Smog Free Project (the largest outdoor air purifier in the world which makes jewellery from smog).