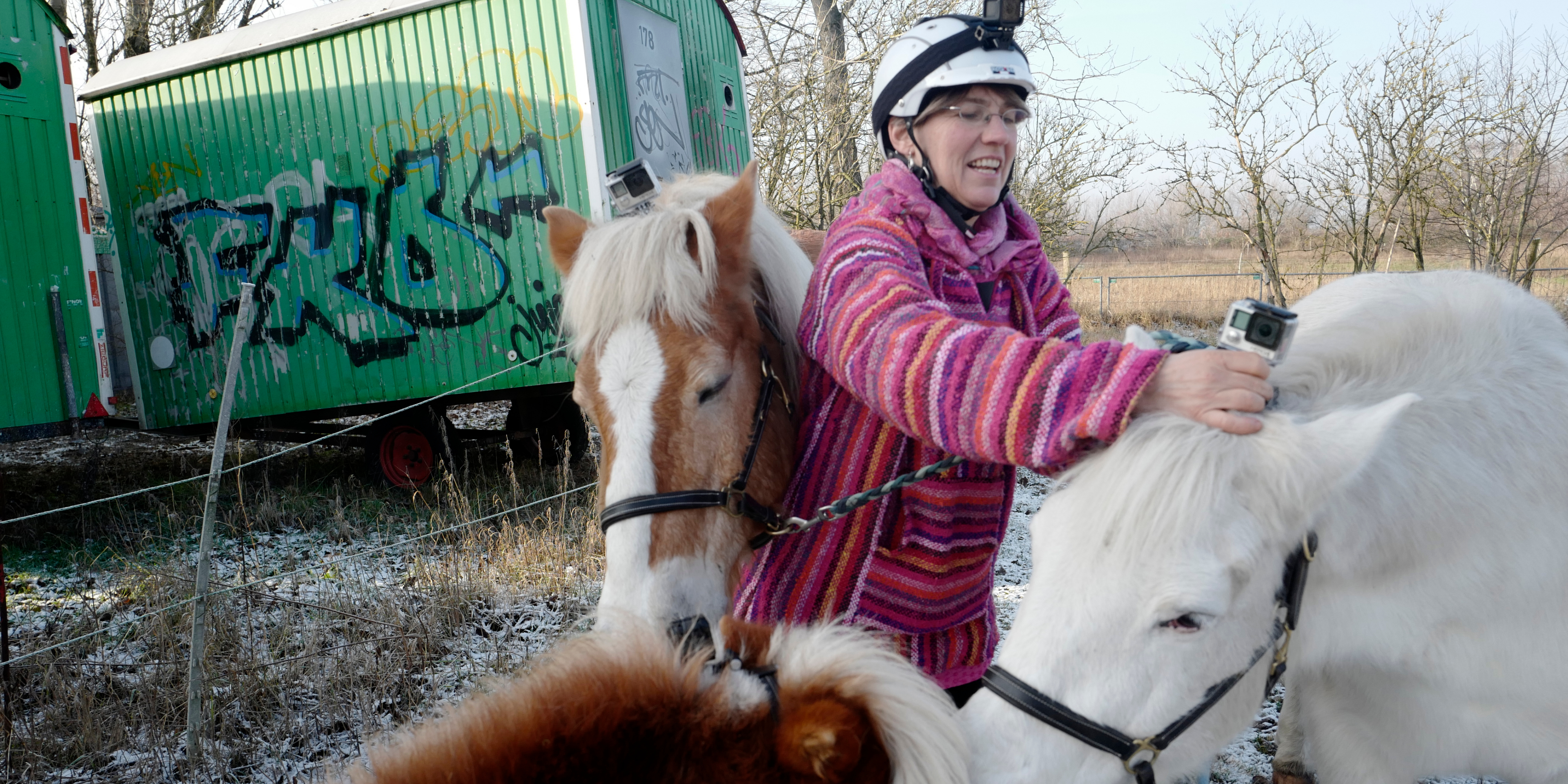 With SLAP I want to make robotics not only understandable but truly approachable. Clifford Nass drew the comparison of robots with domesticated animals. They are useful, but also dangerous. But, how do we communicate with animals? Can we feel them? How does it work?
Luckily, I have three ponies which are happy to serve as guinea pigs. I have rampaged with them as a small tribe through the woods for years. So some communication must occur. They are as creatures alien to us, but also familiar. And they can develop a lot of kinetic energy. Neuroscience has a concept for interaction called Mind Reading. It works with living beings: while watching, we replay them in our own minds, whereby a mood emerges in us, serving us to predict their next actions. The perception-prediction-action feedback loop works mutually, a never-ending process.
Now I try that in a novel way with my ponies. As a first step, I applied a camera between the ears of one of the ponies. The result was interesting to watch, but something essential was missing. The mutuality was missing—the resulting impressions remained alien to me.
I had to take another step and equip all three ponies with a camera. I always tried to stay out of the camera and by accident was caught now and then until I finally understood that this was the missing piece. With four cameras, three ponies, one human: The mutual cycle of perception-prediction and action was made visible.
If you interact with ponies, you cannot plan deeper interaction, or reproducible activities. But, you can give chance a chance, provoke a bit—and something will happen. Wandering around—the aforementioned rampage—works perfectly. As an example, I attached a video clip compiled from a bike trip with my ponies featuring them walking through a gate. Look at the white ear and how it follows me while standing perfectly still. (http://seelikeapony.blogspot.com/2017/05/eine-radtour-mit-dem-e-fatbike1.html) I learned how feedback loops were working, and it proved very helpful for the engineers and designers of robotic interaction. I also learned a lot about myself in relationship to these ponies—I am way too agitated, they are cool. For the self-driving cars, we created the so-called ‘Cooperative Car,’ which has inherited some attitudes from my cool ponies.
For me there is also a touch of magic happening while watching the videos and the movement of the ears, to see the fur so close and nature passing by through their ears. I hope I can share this magic moment with every viewer.

Video: Marcus Werner. Making a video with animals is challenging. Marcus was able to catch the sensible moments with these beautiful creatures.

Sabine Engelhardt studied librarianship in Mannheim and Stuttgart. She studied Communication Science and Philosophy in Berlin, focused on mnemonics as a computer supported knowledge management technique for her masters, and joined the research department at Daimler with Alexander Mankowsky. She has been with Daimler Research since then, working in diverse areas like Knowledge Management and on the Female Perspective on mobility. She developed the perfume device for the current Mercedes-Benz cars and loves this aspect of creating new perfumes in her job. SLAP represents an exciting new endeavor.

Imagine you are driving a car. How do you perceive and preempt what another car on the road is going to do? Now what if that other car is an autonomous vehicle (AV)? Would and should your reactions be different? Driving is a collective intuitive process that relies on acquired heuristics, imparted knowledge, and a shared empathy with the other drivers on the road. Average human drivers and bystanders at present have neither the heuristics and the knowledge, nor the empathy to safely and effectively interact with autonomous vehicles. This presents a significant public safety concern, but also opens up a greater conversation on what effect autonomous driving, and autonomous systems in general, will have on humans. How will we adapt, and in turn how will we be changed?

The jury felt that Sabine Engelhardt’s ponies were an engaging way to understand how autonomous vehicles could be designed to signal in a way that can be intuitively understood by humans. Part of Daimler’s series of projects exploring empathy in self-driving cars, SLAP explores the application of biomimetic design principles to this emerging technology. By mounting cameras on herself and her horses, Sabine Engelhardt is able to trace the reactions of her horses as they wander through meadows and forests and encounter obstacles. In observing the positioning of the horses’ ears and nuances in their physical nudges, clear modalities of communication are revealed that help shape our understandings of the role of empathy between horse and rider when navigating through space and how this might be applied to emergent AV technologies. As autonomous transportation is increasingly deployed, new forms of human-centered signals that are anchored in an awareness of their psycho-social impacts on our perception and decision-making abilities must be developed. The complexity in resolving this element of human-computer interaction in autonomous vehicles is daunting, but the answers might already be hiding in the stable.