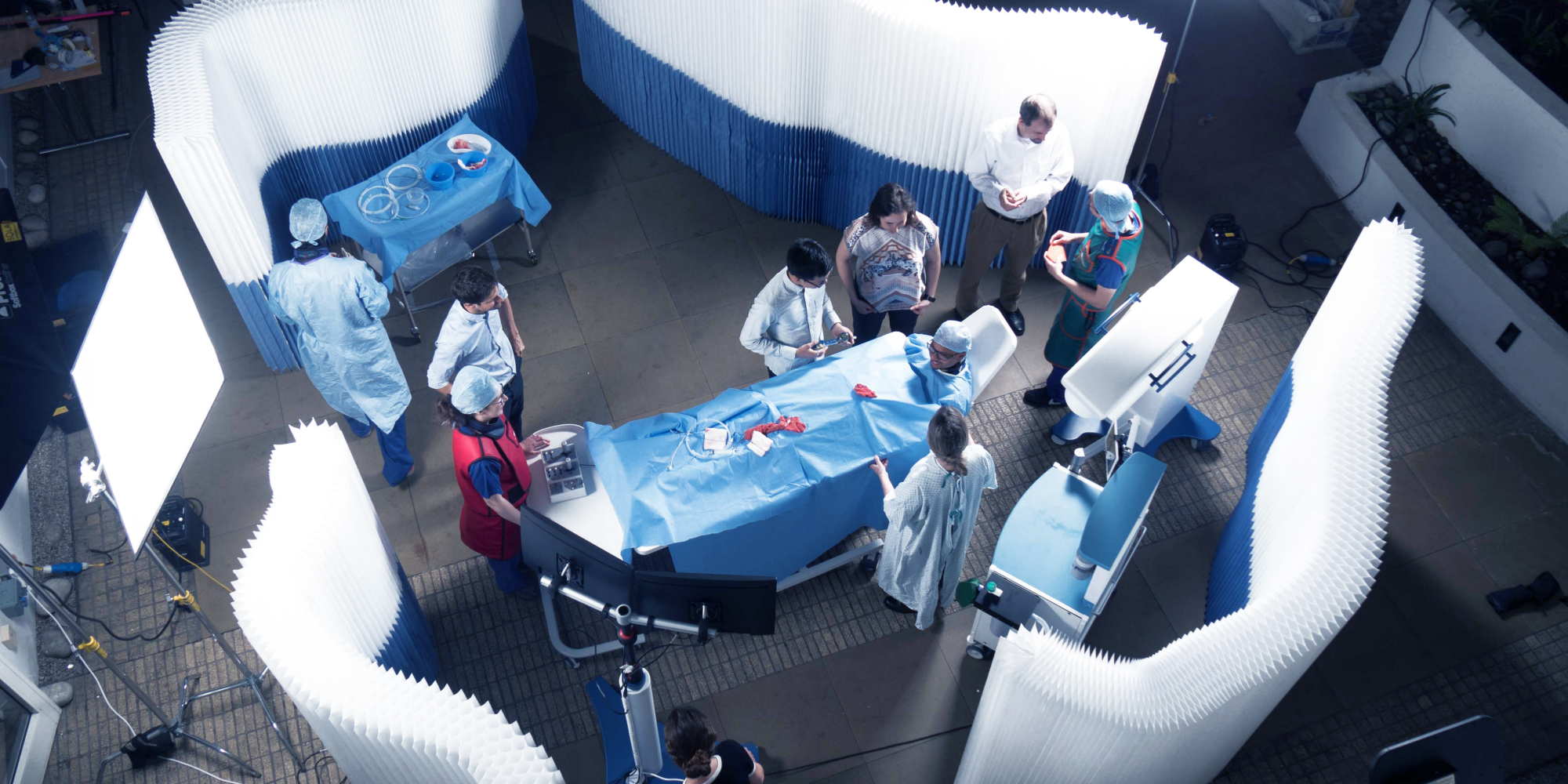 How do surgeons prepare for an operation, when they know that the smallest mistake could be the line between life and death?

That was the question Cellule faced when developing SimCath, a cardiology suite for simulation training. By training in a simulation environment, future surgeons have an opportunity to rehearse for complex surgery, performing common interactions between patients and clinicians in a low risk environment. Developing SimCath was reminiscent of building a theatre set, a stage which mimics the real surgical environment in such a way that the surgeons acting through their roles are immersed in the performance of surgery and the relationship between patients and clinicians.
In collaboration with ICCESS, we worked with patients and clinicians to develop an immersive simulation suite ‘close enough to reality’ so that their behaviors within the simulation environment were as close to that of a live operating theatre as possible. Engineered by the Cellule team, the SimCath elements have been designed and developed to be minimal, lightweight, and allow for affordable batch production. Robust engineering and simplified interface allow for any clinical staff to use it. The unit can be transported easily from hospital to hospital, allowing teams to quickly set up a full-scale operation in numerous different contexts and configurations.
SimCath is the fruit of collaboration between various disciplines: engineering, computer science, cardiology, performance, scenography, and product design, as a truly innovative cross-disciplinary research between art, human sciences, and engineering.

Salomé Bazin – Cellule studio Salomé is a multidisciplinary designer and founder of Cellule design studio. Her vision is to combine design with new technologies to explore new ways to engage people with healthcare, their own body and data, working across product and experience design. Cellule’s work has been featured in Dezeen, Science Gallery, New Scientist… It has been described by the Design Museum as one of the “10 most exciting UK emerging design studios of 2019.”
Fernando Bello – ICCESS is a computer scientist and engineer working at the intersection of medicine, education, and technology. He is Director of the Centre for Engagement and Simulation Science, leading the SiMMS – Simulation and Modelling in Medicine and Surgery research group. He has published widely, is involved in several simulation-based training programs in the UK and abroad, and is Academic Co-director of Imperial’s MSc in Surgical Innovation.

SimCath is a simulation unit which is used for training medical professionals in cardiological surgical procedures. The jury commended Salomé Bazin for bringing her artistic practice as a multimedia artist with experience in theater design to the field of medicine. Her studio, Cellule, worked with the Imperial College Centre for Engagement and Simulation Science in London on the development of an immersive environment that resembled a theater stage that mimicked a real surgical environment. This scenographic environment was then used for simulation training for surgeons, creating a learning environment that more accurately mimics the real high-stakes situations of invasive procedures than the traditional staid classroom. The jury was fascinated and compelled by Salomé’s creative application of her experience in stage scenography to the societally-critical context of medical training.