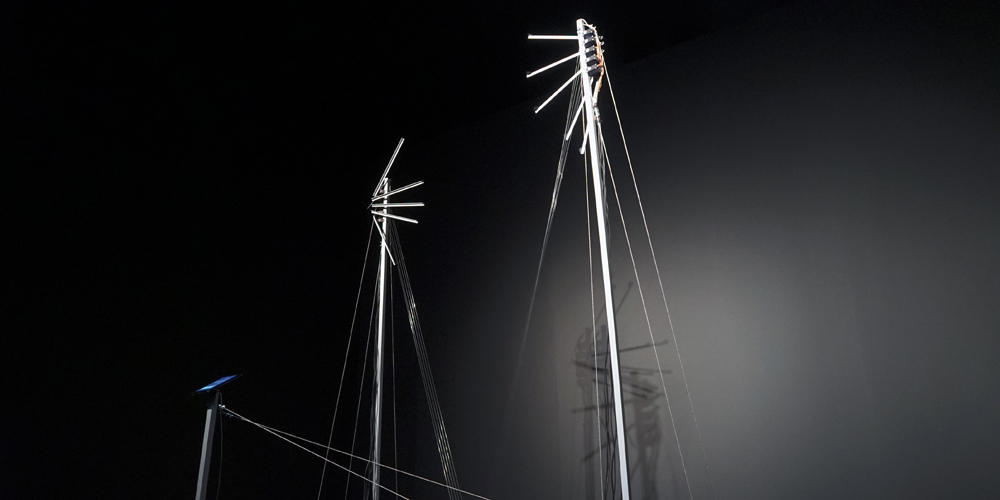 The installation Silk tracks the real time changes in the market activities related to cryptocurrencies Bitcoin and Litecoin. The constantly changing currency rate of Bitcoin against major world currencies is influencing the strain of strings in installation and the way the picks are hitting them. The robotic system of the artwork is directed by a computer algorithm–influenced by dynamic changes of data, the installation sounds like a complex sound instrument.

Each stand sprouts 5 diagonal strings which correspond to 5 currencies (US dollar, yuan, euro, Canadian dollar and Russian ruble). These strings are pulled on special automatic tuners moved by stepper motors directed by a computer algorithm.

This piece explores how new technologies and progress in such areas of knowledge as cryptography, mathematics, and computer science influence the financial system, inevitably changing the social structure of society.

::vtol:: is the alias of Moscow-based media artist Dmitry Morozov (RU). He focuses on technological art–robotics, sound art, and science art. He is the laureate of the Sergei Kuryokhin Prize (St.Petersburg, 2013) and Prix Cube (France, 2014). Dmitry received honorable mentions at the VIDA 16.0 (Spain, 2014) and Prix Ars Electronica (Austria, 2015).