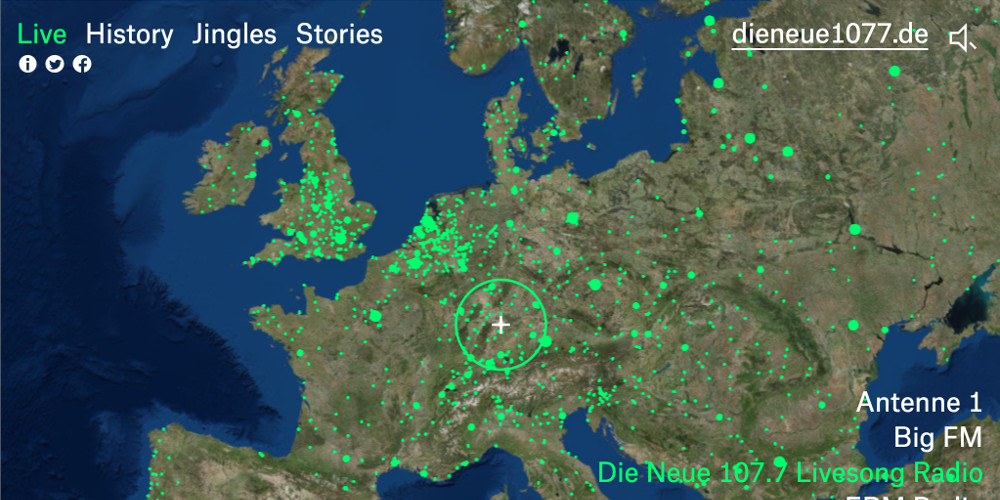 From its very beginning, radio signals have crossed borders. Radio makers and listeners have imagined both connecting with distant cultures, as well as re-connecting with people from ‘home’ from thousands of miles away—or using local community radio to make and enrich new homes. The online platform *Radio Garden* introduces a new way to listen to radio online. By turning a 3D globe, you can tune in to 14,000 stations in more than 7,000 cities. At a time when most people tend to be focused on their own immediate environment, this project shows that radio has no borders and can unite the world.

The original development of Radio Garden started at Moniker, where Jonathan Puckey and Luna Maurer came up with the concept. The project was designed by Jonathan Puckey, Phillip Bührer, and Luna Maurer. The project was developed in-house by Jonathan Puckey. After leaving his role as founding partner at Moniker, Jonathan Puckey continued work on the platform in his own practice Studio Puckey. Every day we receive submissions from 50+ stations across the world. We work with a small team of volunteers to keep our station database up to date. By doing so, we have added over ten thousand stations in the last year. We actively prune out duplicate entries and check the validity of the submitted information.