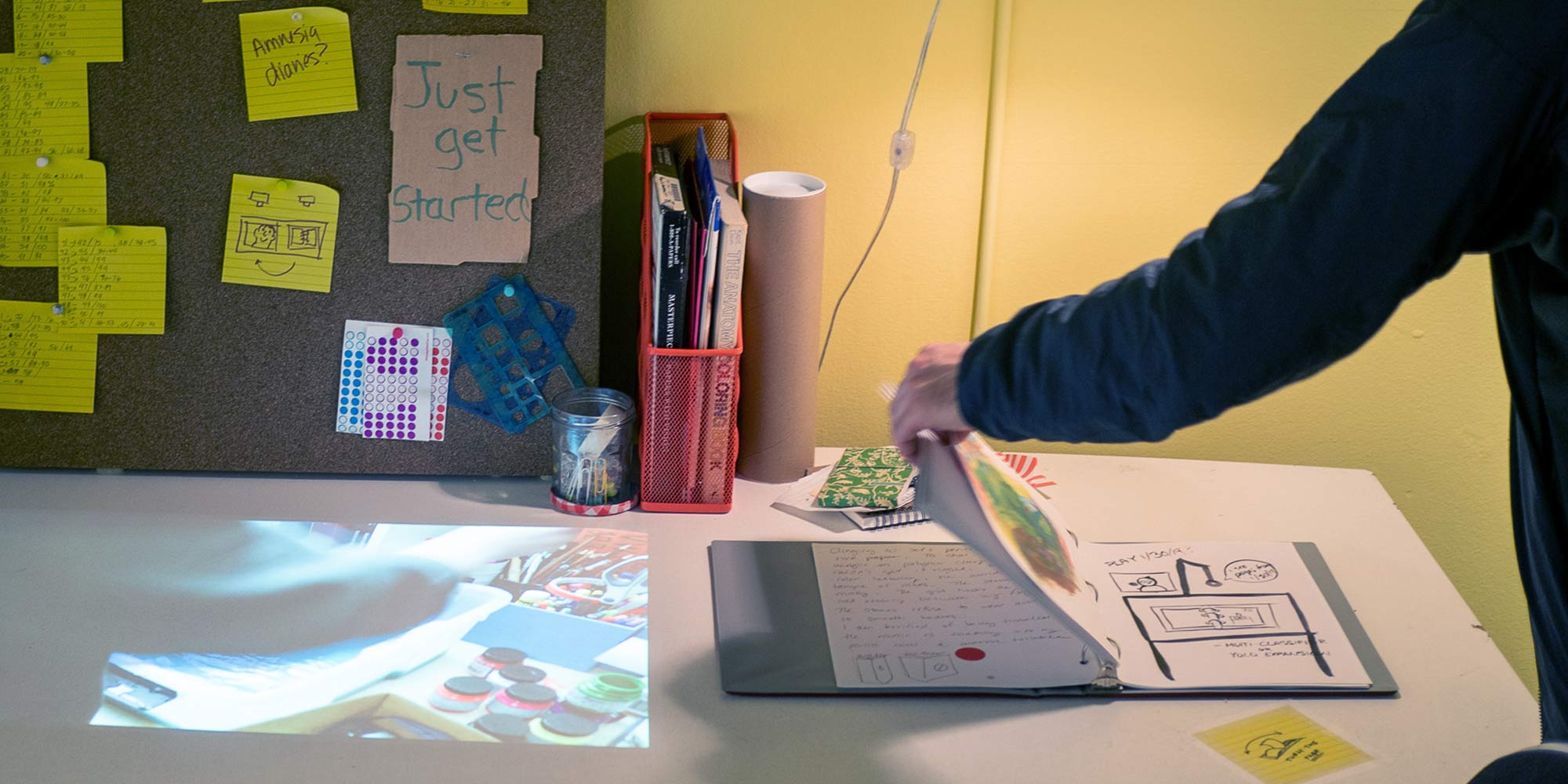 Prosthetic Memory is an ongoing experiment in self-augmentation combining handmade journals, daily videos, and a custom AI. With the journal lying flat on a desk, a camera captures its pages. The AI compares this feed to its model, determines which page is showing, and projects an associated video memory on the desk nearby. Created to replace the artist’s long-term memory that was damaged by a childhood brain injury, Prosthetic Memory explores questions like:
– When memories are external, mediated, and public, what is the difference between how they are experienced by their creator and an audience?
– Do our assumptions, fears, and uses for AI change when data and machine learning models are created by individuals and families on a personal, instead of a corporate scale?
– Given our increasing exposure to algorithmic interventions, how do our identities and perceptions shift when we see ourselves and others through that lens?
The first iteration of Prosthetic Memory, captured in the documentation provided, created a bridge between the physical and virtual components of the memory. In upcoming iterations an age-malleable recreation (deep fake) of the artist will appear on a screen above the notebook, reading from its pages, and, using NLP and sentiment analysis, pointing the user to other pages and videos with similar events or feelings.

M Eifler (US) is an artist and researcher working in embodied/spatial interaction, speculative interfaces, and computational prosthetics. They have exhibited work or performed at TED in Vancouver, the Exploratorium, SFMoMA, the YBCA, the Wattis Institute in San Francisco, XOXO, Wiensowski & Harbord in Berlin, Laurie M. Tisch Gallery and the Armory Show in New York, Seattle International Film Festival, as well as the Smithsonian Institution and Kennedy Center. During the pandemic they have been honored to contribute to the Harvard Safra Center’s Roadmap to Pandemic Resilience team. Eifler graduated from California College of Art in 2011 with an interdisciplinary MFA.

Prosthetic Memory is an experiment composed of journals, video recordings of daily events and thoughts and processed by a personalized AI algorithm that triggers video projections filtered by the relevancy of analogue handwriting in journals. It is an ongoing experiment that might show some different adaptations in the future. With this project, M. Eifler tries to solve the limitation of her permanent loss of long-term memory capabilities, while also asking a series of interesting questions: How can AI capture and confirm human identity? Can an AI algorithm reproduce my own feelings or only generate feelings that I am supposed to be feeling?

The artist illustrates how a DIY homemade AI, solely designed for personal use and generated without any cloud data, can open up an empowering approach to this technology while also enhancing human capabilities. It lives up to the challenge of humanizing a technology that is so often negatively perceived. Prosthetic Memory is thus a highly relevant artistic inquiry into the relationship between humans and artificial intelligence.