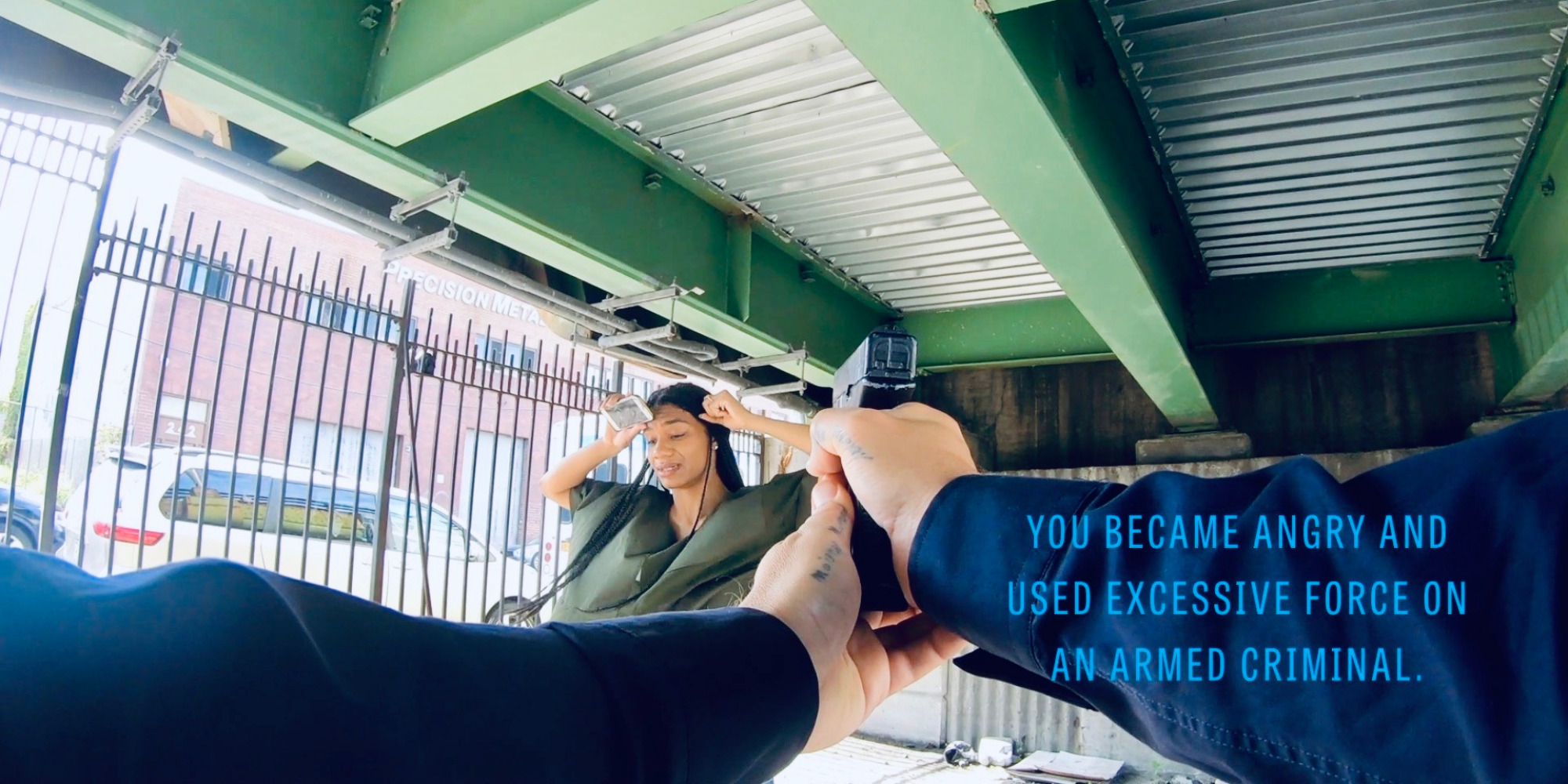 Perception iO (Input Output) is the future of Law Enforcement. An Artificial Intelligence data set emotionally responsive to the participant and potentially their bias.
The participant will assume the role of a police officer watching an interactive training video of an escalating volatile situation. They will experience the interaction from the perspective of a cop’s body camera and come into contact (separately) with a black protagonist and white protagonist. Each protagonist plays either the role of a criminal or of a person with mental health issues.
The Perception iO system will track the participants facial expression. How they respond emotionally to the scene will have consequences for the characters. It will influence the branching narrative to prompt the cop to either arrest, assist or shoot the character on the screen.

The Perception iO immersive experience is a convergence of neuroscience, behavioral psychology, film, AI, facial emotion detection, eye tracking, bias and social justice. It reveals how a person’s emotions (and eye tracking functionality currently in development) influences their perception of reality through an immersive storytelling experience.
After extensive research in Artificial Intelligence, this installation will enable participants to experience how easily human bias can be intergraded into networks by humans and therefore understand the necessity for Transparency and Regulation in AI. The immersive experience generates self-reflection and discussion on issues of bias, ethics and accountability for the participants and people creating these types of systems.
This is a collaboration of Art (Cooper Hewitt), Tech (ThoughtWorks Arts) and Science (NYU) to create the installation and undertake the ethical, academic and philosophical R&D. EmoPy is the bespoke (open source), deep neural net toolkit for emotion analysis via Facial Expression Recognition (FER) created by ThoughtWorks Arts and Karen Palmer. Perception iO was commissioned by The Cooper Hewitt Smithsonian Design Museum NYC. 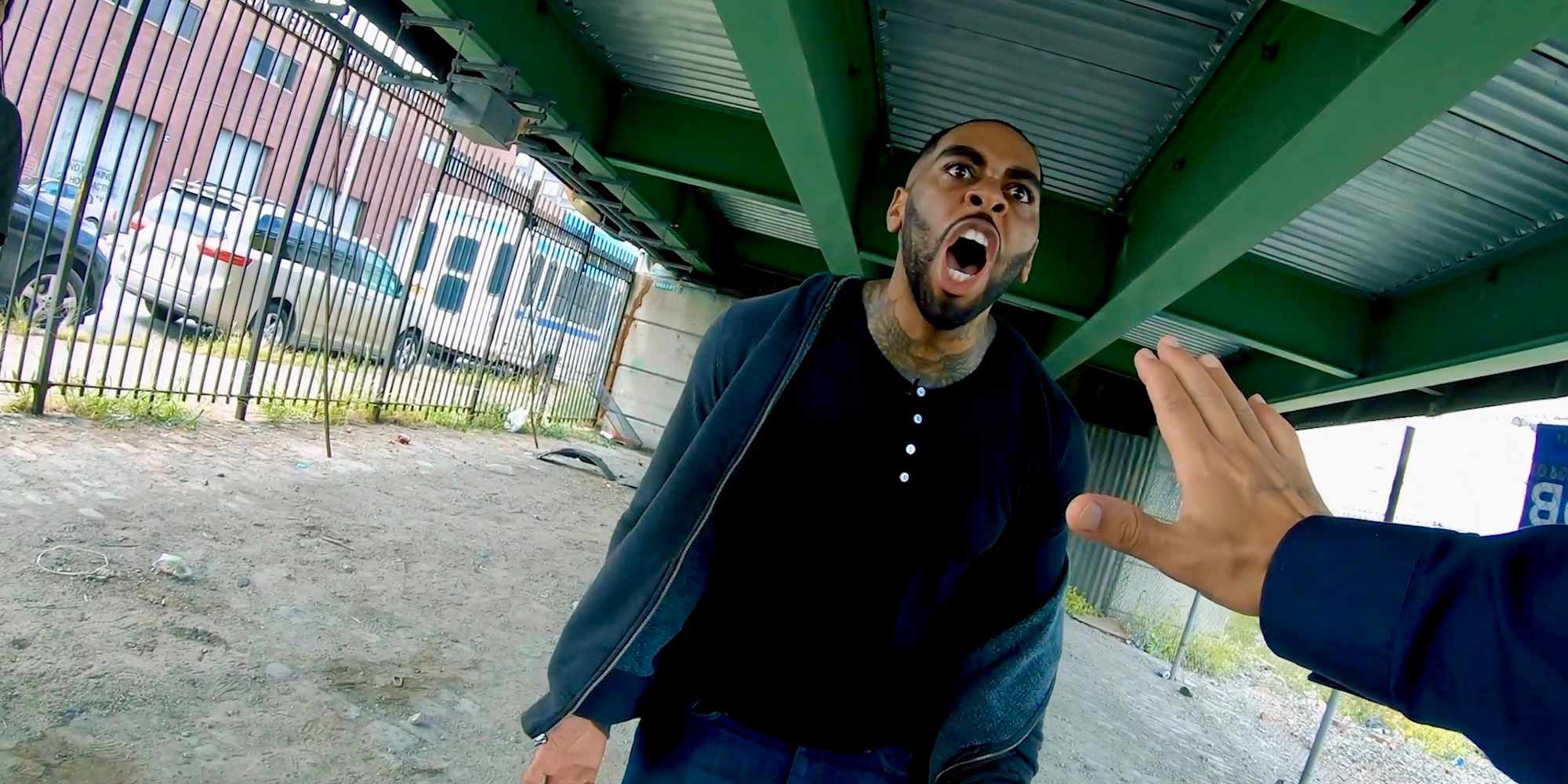 Karen Palmer (GB) is the Storyteller from the Future. International Artist and TED Speaker.
Her work is at the intersection of AI, Immersive Storytelling, Neuroscience, Behavioural Psychology, Implicit Bias and the Parkour philosophy of moving through fear. Articles (have appeared) in Wired, Forbes, CBS TV , Fast Company, Engadget, The Guardian “This has Leapfrogged VR” etc. and she has exhibited at the V&A London, PHI Centre Montreal, FoST NYC, The Museum of Modern Art Peru, SXSW, SIDF etc. Her previous emotionally responsive film RIOT was honored as part of Columbia University’s Digital Dozen: Breakthroughs in Storytelling 2017.

Perception iO is an interactive installation that provides an intuitive understanding of the importance of transparency and regulation of AI, especially for citizens unfamiliar with the technology. Karen Palmer (aka Storyteller from the Future) creates an immersive experience utilizing film, biometrics, and other technologies to capture and assess the emotional response of participants in the judgment enforcement process, providing a valuable insight into the unarguable dark reality of inequality.
By uncovering unconscious bias in both ourselves and the authorities, it addresses the need for a control mechanism during the conceptualization, development as well as implementation of AI. While AI is oftentimes seen as something that will replace humankind, it is also largely misunderstood. The Perception iO installation in contrast provides an insight into the implications of a flawed process, without necessitating a deep understanding of the complex technology behind it. It thereby motivates the observer to reflect on their own ethical values while also recognizing the positives and negatives of AI.