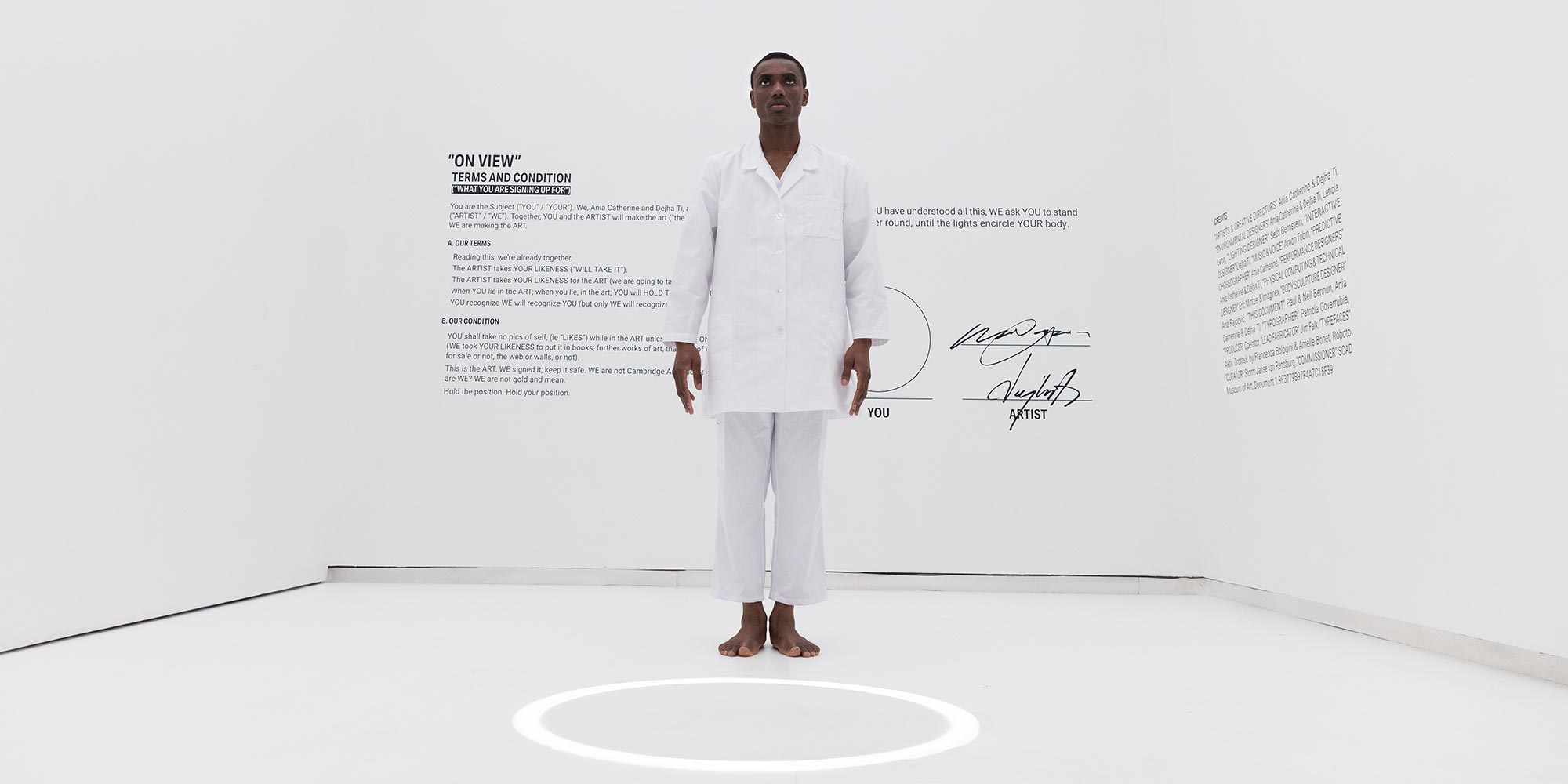 Ania Catherine and Dejha Ti’s seminal interactive performance installation On View (2019), commissioned by the SCAD Museum of Art, examines the generational desire to be the subject of an art experience and that phenomenon’s relationship to addictive interfaces, surveillance capitalism, and data privacy in modern society. Equally a socio-political critique and an experiment in art and technology, On View offers audience-participants a way into the critical conversation on the digital architectures we inhabit, illuminating the underlying forces shaping our everyday realities through experiential art. Tech literacy is imperative—especially as technology becomes increasingly invisible. The artists harness their fleshy approach to human-computer interaction and immersive art to create a world that speaks to feeling states—eliciting dimensions of knowing that imprints a physical memory.

On View manifests as mixed reality, allowing audience-participants to interact with a virtual world with no virtual layer as they move through the installation’s three spaces: Terms & Condition, Stages Gallery, Golden Gallery. While the installation appears to be non-digital, it relies on a ubiquitous network of technology, using TouchDesigner as a mainbrain integrating real-time facial recognition (AI subsets: computer vision & machine learning), voice commands, microprocessor devices/objects, environment-embedded sensors, kinetics, and guest profile generation. The technology is embedded both conceptually and technically into the backdrop of the experience—a critical nod to the misuse of pervasive computing and IoT. Using hyperbole, the piece demonstrates how small and frequent choices in our daily lives make us extremely vulnerable—like unknowingly training facial recognition systems or clicking “I agree” to a T&C we never read. On View won an ADC Award 2020 for Experiential Design (Digital Experiences/Responsive Environments) and was shortlisted for Lumen Prize 2020 for 3D/interactive.

Ania Catherine and Dejha Ti (US) are an LA-based experiential artist duo whose practice merges environments, technology, and performance art. Rooted in the understanding that immersion is not only a physical state but also an emotional one, their approach employs nuance in scale, producing a feeling instead of a spectacle. Their expertise collide—Ti’s extensive background in immersive art and human-computer interaction, and Catherine an established choreographer, performance artist, and gender scholar—in large-scale conceptual works recognizable for their signature poetic approach to technology.

In modern society, users are constantly exposed online to various addictive interfaces, surveillance, and data privacy, often not knowing what is actually going on. On View (2019) is an installation that allows the audience to interact with those interfaces in the virtual world, with no virtual layer, being exposed directly to that awkwardness that is usually hidden behind the online interactions. Through the installation, the audience is forced to experience, learn, and feel the weight of what is actually going on when they sign the Terms & Conditions online that they may not read, unaware that they may be signing up for facial detection and facial recognition. On View raises awareness of the issues such as privacy, data protection, data ethics, and surveillance capitalism, which are concerns often addressed in Europe with the GDPR.