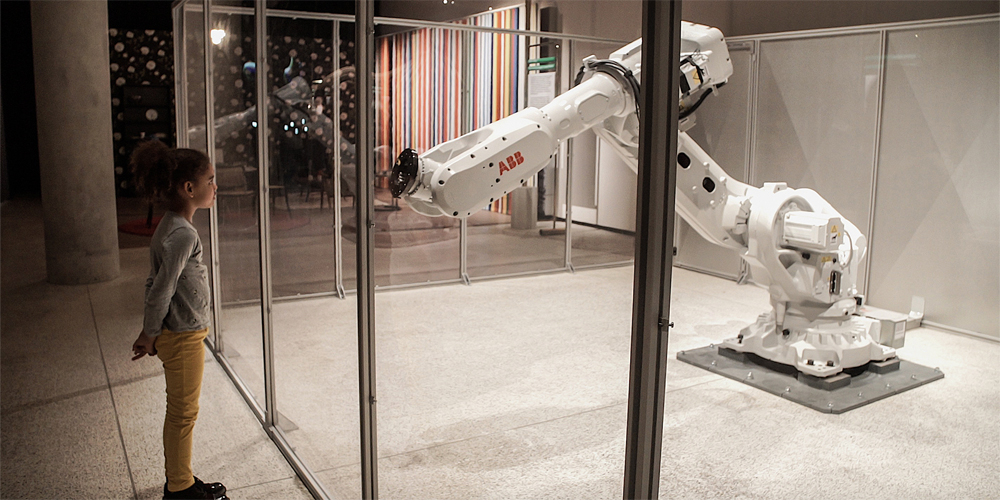 Mimus is a giant industrial robot that’s curious about the world around her. Unlike in traditional industrial robots, Mimus has no pre-planned movements–she is programmed with the autonomy to roam about her enclosure. Mimus has no eyes, however she uses sensors embedded in the ceiling to see everyone around her simultaneously. lf she finds you interesting, Mimus may come over for a closer look and follow you around. But her attention span is limited–if you stay still for too long, she will get bored and seek out someone else to investigate.

Our interactive installation responds to a commonly cited social fear–robots taking over work from humans. The World Economic Forum predicts that robots will take five million jobs over the next five years. However, we believe in a more optimistic future, where robots do not replace humanity, but instead enhance and complement it. Ordinarily, robots like Mimus are completely segregated from humans as they do highly repetitive tasks on a production line. With Mimus, we illustrate how wrapping clever software around industry-standard hardware can completely reconfigure our relationship to these complex, and often dangerous, machines. Rather than viewing robots as human adversaries, we show a future where autonomous machines like Mimus might be companions that peacefully co-exist with us on this planet.

Industrial robots are the foundation of our robotic infrastructure, and have remained relatively unchanged over the past 50 years. With Mimus, we highlight an untapped potential for this old industrial technology to work with people, not against them. Our software illustrates how small, strategic changes to an automation system can take a one-ton beast-of-a-machine from spot welding car chassis in a factory, to curiously following a child around a museum like an excited puppy. We hope to show that despite our collective anxieties about robotics, there is potential for empathy and companionship between humans and machines.

Madeline Gannon (US) is a multidisciplinary designer working at the intersection of art and technology. She leads ATONATON, a research studio inventing better ways to communicate with machines. In her research, Gannon designs and implements cutting-edge tools that explore the future of digital making. Her work blends disciplinary knowledge from design, robotics, and human-computer interaction to innovate at the edges of digital creativity. Gannon is currently completing a PhD in Computational Design at Carnegie Mellon University, where she is developing techniques for digitally designing and fabricating wearables on and around the body.

Autodesk has taken the lead in how industries could collaborate with artists and designers. While the latest technologies like AI and robots tend to be managed highly confidentially, the jury agrees that it is very important for tech companies to design open collaboration by hosting residential programs and learning from anti-disciplinary groups for innovation.