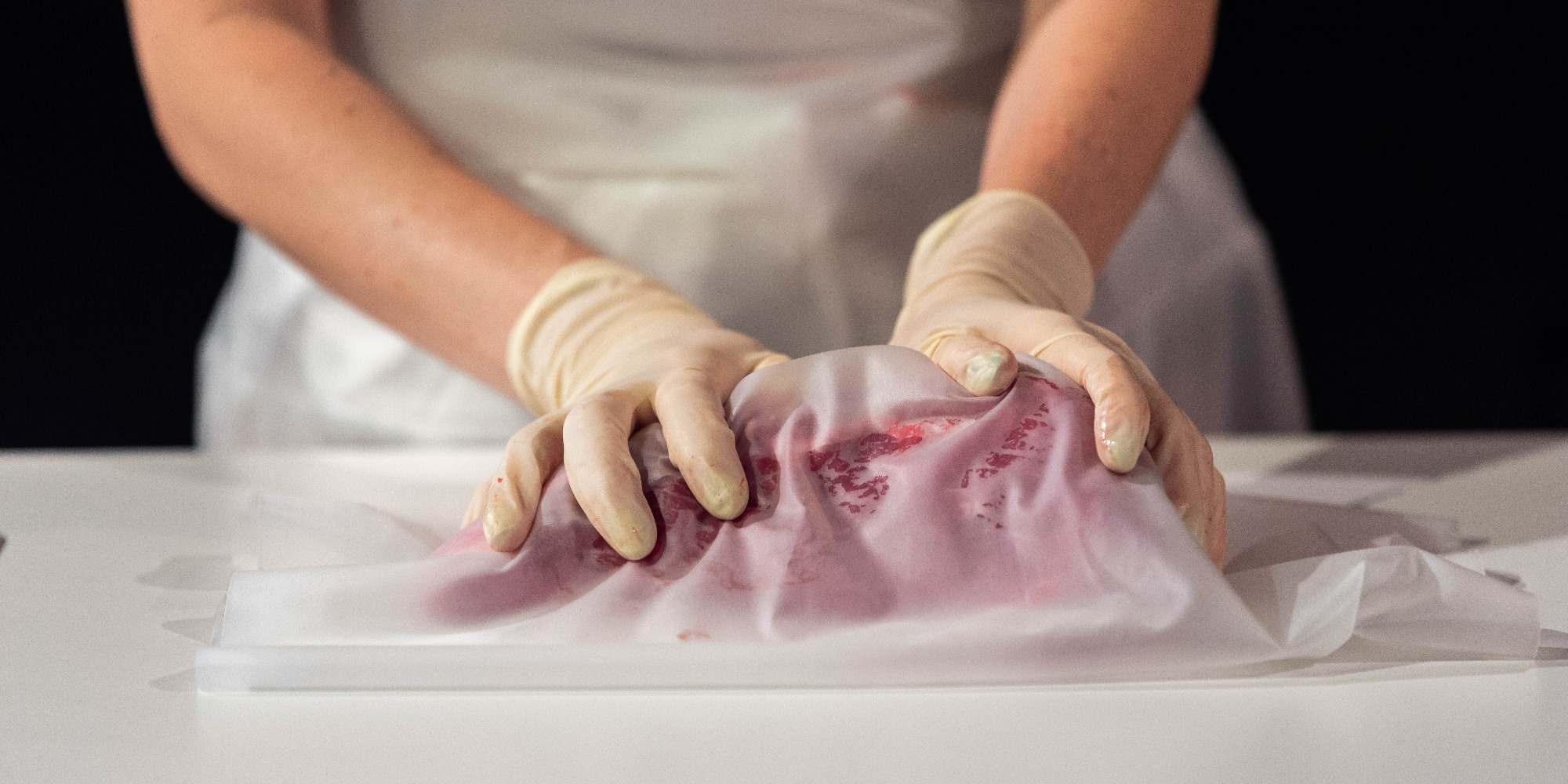 Many thinkers of posthumanism stress a non-human-centered perspective on the world, that we should assume a more modest role in our dealings with nature and stop hierarchizing species. Theresa Schubert draws a radical consequence: if we treat humans the same as we treat animals, we should also be material and food. In her artistic research project and performance mEat me, Schubert demonstrates this provocative scenario as an alternative reality. With consequent fearless exploitation of her body, she creates aesthetic experiences beyond human exceptionalism. Making the human vulnerable can also be understood as a strategy for raising awareness of biopolitical issues and a more conscious dealing with nature and its living beings at large. It’s also a critique of the ethical image presented by the cultured meat industry and how this idea per se is not solving environmental problems.

In the context of an atmospheric-intense performance consisting of video projections and spatial sound, mEat me shows the human meat-growing process and the consumption of her own flesh. The artificially developed corporeality of her own flesh engages in a dialogue with a voice generated by machine learning models. The exchanged information defines a level of abstraction which mirrors our disconnection regarding food supply. Schubert turns herself into a material and resource, breaking the societal taboo of cannibalism by misusing technology that was invented with the intention of capitalizing on it.

As an artistic research project, mEat me applies innovative biotechnological advancement beyond a scientific purpose or monetary intent. For the lab process, a serum, gained out of her own blood, was used to reproduce her muscle cells that had previously been extracted. The resulting cultured human meat shifts normative borders and dissolves the consumerist hierarchy between humans and animals. It engages with the urgent topic of food supply in times of meat mass production and its relevance not only for our consciousness but our planet.

mEat me was produced by Kapelica Gallery in Ljubljana in 2020. This project received funding from the Thuringian program for the promotion of young female academics and artists and Bauhaus-Universität Weimar. The program of Kapelica Gallery is supported by the Ministry of Culture of the Republic of Slovenia and the Department of Culture of the Municipality of Ljubljana.

Theresa Schubert (DE) is a Berlin-based artist exploring unconventional visions of nature, technology, and the self. Her work combines audiovisual and biomedia with conceptual and immersive installations or performances. By means of interdisciplinary methods such as biohacking, theoretical analysis, performative interpretation, and material experimentation, her works question the relation of humans to their environment and the evolvement of matter and meaning beyond the Anthropos.
More recently, she has worked with UHD video environments and 3D Laser Scanning to challenge modes of perception and question the human-machine-nature relationship in hypertech societies.

Not since Lee Miller photographed a severed breast on a dinner plate in 1929 and Orlan’s performances of carnal art of the 1990s have we seen human flesh as food for thought. Veganism doesn’t seem too extreme compared to the impressive work of artist Theresa Schubert. Taking our obsession with meat, the realities of gene manipulation, and our food production realities, she really does make us eat hyper-locally. Her videos and photographs explain the process of turning a sample of her own blood cells into lab-grown meat. By treating the human body as just another food choice, her work puts us back into the animal kingdom and Nature where we belong. It’s bold and might even be shocking to some, but the reality is, if we treat our own bodies the way we treat the bodies of the animals that help us both to nourish us and to overcome disease, we might find commonalities instead of differences.