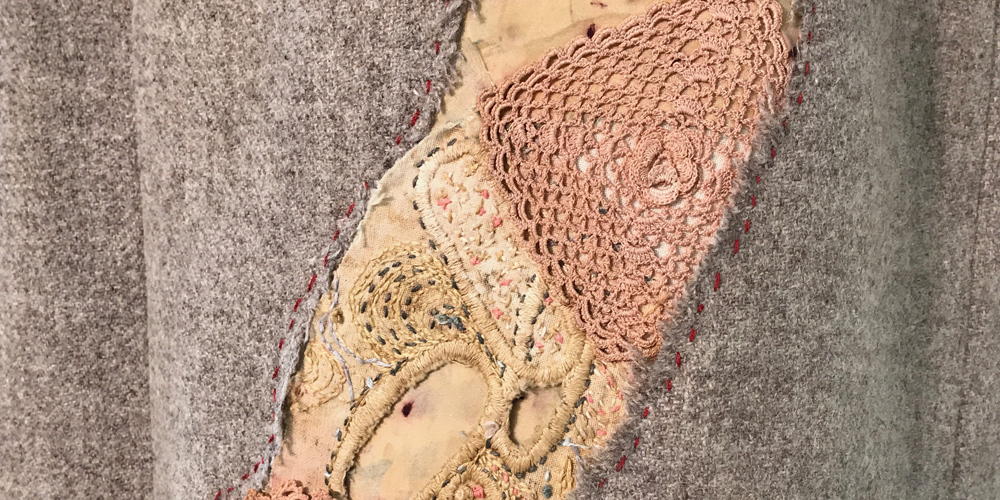 Make Do and Mend references the 75th anniversary of the first use of penicillin in a human patient in 1941 and takes the form of an altered wartime woman’s suit marked with the British Board of Trade’s utility logo CC41, which stands for ‘Controlled Commodity 1941’. The holes and stains in the suit have been patched with silk stained with pink colonies of E. coli bacteria, grown on dye-containing agar. The genomes of these bacteria have been edited using a technique called CRISPR, to remove an ampicillin antibiotic resistance gene and scarlessly patch the break using homologous recombination with a fragment of DNA encoding the WWII slogan Make Do and Mend. Ampicillin is part of the penicillin group of antibiotics, so with this artistic genomic edit, Dumitriu and Goldberg have used today’s technology to return the organism to its pre-antibiotic era state, reflecting on how we might in future control and protect such biotechnological advances.

Supported by the FEAT project, an initiative of eutema GmbH (AT), Stichting Waag Society (NL), and youris.com (BE). lt has received funding from the European Union’s Horizon 2020 Research and Innovation programme under grant agreement No 686527 (H2020-FETOPEN- 2015-CSA). Made in collaboration with Dr Sarah Goldberg at the Synthetic Biology Laboratory for the Decipherment of Genetic Codes at the Technion in Israel. With assistance from Dr Heather Macklyne, University of Sussex, and Dr Rob Neely, University of Birmingham.

Anna Dumitriu (UK) (1969) is a British artist whose work fuses craft, sculpture, and Bio Art to explore our relationship to the microbial world, medicine, and technology. She is affiliated to the Modernising Medical Microbiology Project at the University of Oxford (UK), the Department of Computer Science at The University of Hertfordshire (UK), Brighton and Sussex Medical School (UK), and Waag Society (Netherlands). She is the artist partner on the EU Horizon 2020 funded FET support action FEAT: Future Emerging Art and Technology and is working with MRG-Grammar to explore gene regulation.