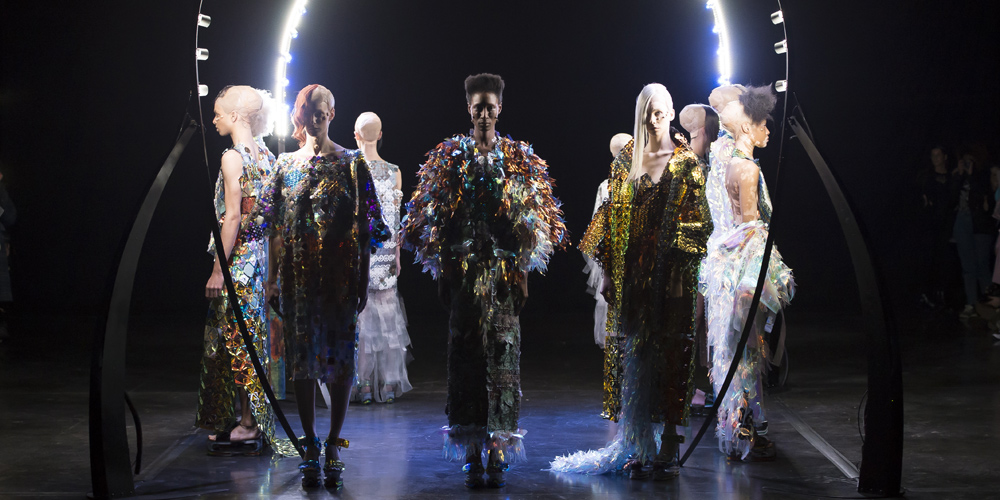 Long ago in history was the belief that the four elements–fire, wind, water, and earth–could combine together as one to birth a never before known substance. Today, this is an unrealistic fantasy, however, by incorporating the latest in technology, the designer imagined the future of clothing in this collection.

In the near future, textiles will be made for the individual who wears it. By function, aesthetics, touch, form, and other factors, clothing will be able to transform instantaneously. Eventually, in fashion, no two garments will be the same.

This is based on a long-term project towards a vision for the future in which Yuima Nakazato would like to realize: “to each individual, his own design”. lf clothing can be created without being sewn, the concept of designing, manufacturing, and distribution will change greatly. Designing for specific individuals will be made possible. Each item in this collection is created without a single thread or needle, each formed simply of thousands of components, which we name Units. The patterns depicted show the Units that make up each piece.

Yuima Nakazato (JP) was raised in a house that his sculptor father took over 20 years to build. His mother was a jeweler, so he spent his childhood surrounded by an environment of modern art, handmade furniture and clothing, and various forms of expression. After studying fashion design at the Royal Academy of Fine Arts Antwerp’s Fashion Department, Nakazato began costume designing for both domestic and international recording artists, films, and theater. lt was then that he discovered the appeal of creating custom designs for individuals and felt the desire to spread this experience to a greater audience.

The title of this long project by fashion designer Yuima Nakazato is from the names of the elements in Latin Fire, Air, Water and Earth. Here we see the vision of each individual wearing their clothes as an extension of their personality and physical attributes. The jury recognized the importance of the idea of having clothing created without being sewn but instead being formed from thousands of components or units. We see this trend in many areas of society and technological development, and to have it also reflected in individual expression is an important contribution to new ways of envisioning the fashion design industry.