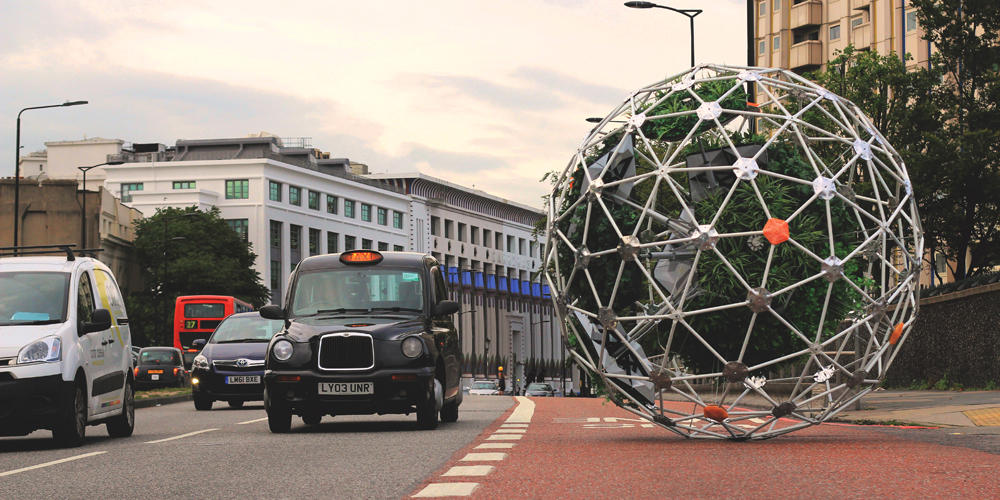 Although plants lack nervous systems, they can, much like animals, become electro-chemically stimulated by their surrounding environment. Measuring this, we begin to understand the stimulus-response mechanisms that make up their primitive intelligence. Networked together we’ve harnessed their collective intelligence, exploring new forms of bio-cooperative interaction. The result is half garden, half autonomous vehicle a cybernetic lifeform we’ve named Hortum machina, B.

This three meter diameter geodesic sphere with a robotic core, encapsulating 12 garden modules, can shift its center of gravity, allowing it to gently roll around, controlled by the “thoughts” of the plants onboard. If the ones on the bottom feel like they need more sunlight, they “vote” to have the sphere roll over. If it becomes too hot for many of them, Hortum machina, B will find a cooler place in the shade. This is an autonomous, democratic, and networked living ecology of plants amplified by robotic agency.

The Interactive Architecture Lab (UK) is a multi-disciplinary research group at the Bartlett School of Architecture (UCL). Research revolves around the behavior and interaction of things, environments and their inhabitants. The reEarth Project is led by William Victor Camilleri (MT) and Danilo Sampaio (BR), and supervised by Ruairi Glynn. Parametric Design and Fabrication was supported by William Bondin, Francois Mangion, and Thomas Powell.