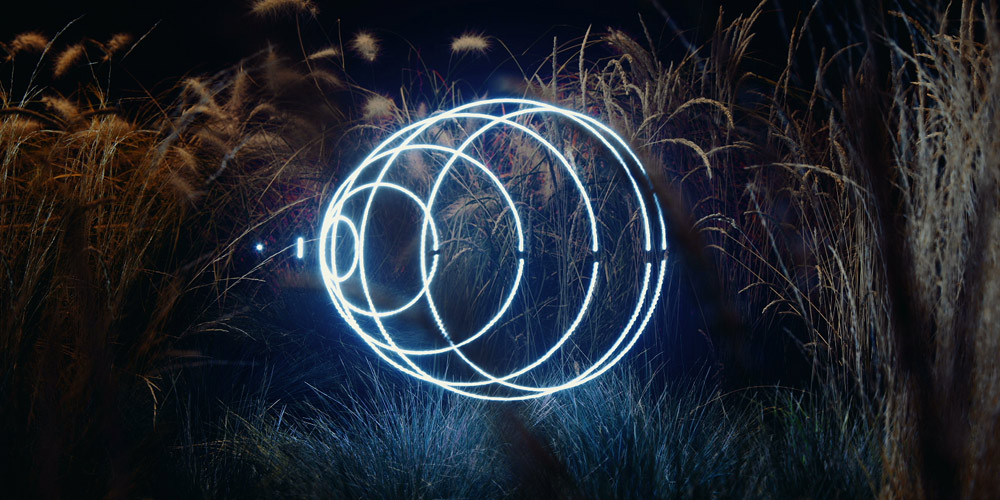 The experimental music video for Floating Points (the name under which English musician and neuroscientist Sam Shepherd performs), portrays an abstract oscillating light that evolves through the music in different life forms. All lights are in-camera produced effects that are made by a self-developed light paint machine. We’ve created a piece that, both in content and in its implementation, speaks of an analogue universe. Technique and form merge to bring out the geometry of Floating Points’ sound, which, as a living being, mutates and creates a particular ecosystem. We invented a light-painting machine capable of reproducing light forms in motion, allowing us to film it with a camera, without the need of postproduction.

The machine was also capable of controlling other aspects such as camera shutter release, lights and fog machines, and a self-built motion control system. We wanted to make a video that involved a technical challenge and allowed us to conceptually explore the artistic complexity of Floating Points’ sound, so we could reflect its music in a visual way.

It took us 6 months of work divided between development and shooting (outdoors and indoors). This making of video offers an insight into the shooting phases and the process.

Hamill Industries is composed of Pablo Barquín (ES) and Anna Diaz (ES), who are directors, art directors, passionate makers and mix-media artists. They love in-camera effects and combine old and new visual techniques. They focus on the conceptualization, design and development of audiovisual projects, installations, and spectacles. One of their goals is to playfully blend tangible and virtual worlds, through intensive research, different media, and technology. Pablo Barquín founded his first studio, Physalia, where he acquired recognition in the motion-graphics world and stood out for his crafted visual projects in which a wide range of different filming and interaction techniques combined in unique and spectacular ways. Anna Diaz graduated in audiovisual communication from the Universitat Pompeu Fabra, spent time studying at the Free University of Berlin, and started her professional career at XCENTRIC (CCCB).

Junior Martínez (UK/VE) is a diverse director and illustrator, as comfortable behind the camera as he is behind the pen. He has a passion for graphics and studied graphic design at Prodiseño (Escuela de Comunicación Visual y Diseño) in Caracas before joining a print design studio.  Jun founded the No-Domain design studio in 2003, active for over 10 years, before eventually embarking on a solo career in 2013, directing video clips, spots, and special audiovisual projects. Jun has been awarded at San Sebastian’s El Sol festival and Grand Laus in Barcelona, and his work has been featured in Stash, Onedotozero, Motionographer, and Vimeo Staff Picks, amongst many others.