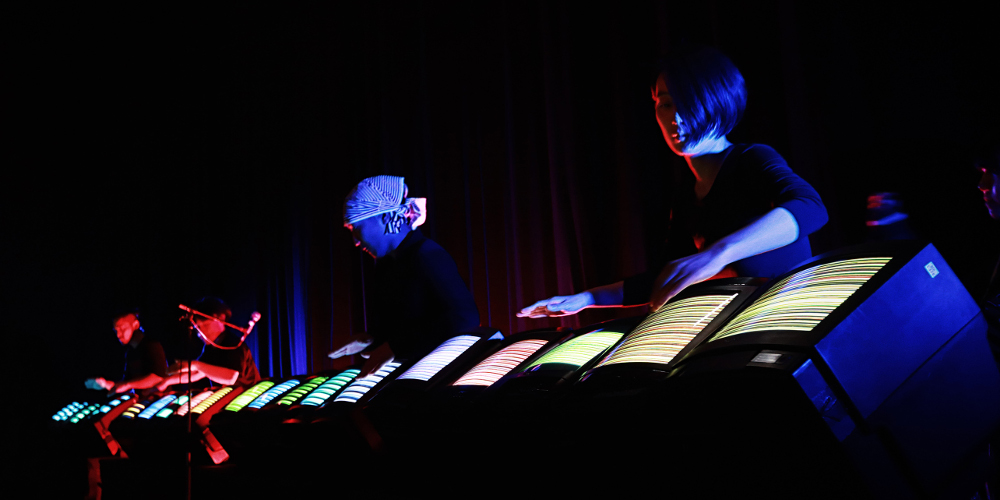 ELECTRONICOS FANTASTICOS! is a project where retired consumer electronics are resuscitated as instruments, new ways to play music are invented, and all kinds of people are invited to be orchestrated with the artist and musician Ei Wada.

Once we dismantle old consumer electronics, we realize the condensed wisdom of pioneers and the interesting and mysterious scientific/physics phenomenon hidden inside these objects. By transferring these into electronic musical instruments, a sound like a groan of electronics begins to echo. Old consumer electronics come to life as yokai—supernatural creatures from Japanese folklore, sometimes they appear as spirits of abandoned tools.

Currently, we have 3 main bases of creation: Tokyo, Kyoto, and Hitachi. More than 70 members have joined the project from diverse fields such as engineers, designers, musicians, and management members. In November 2017, under the most symbolic old radio tower Tokyo Tower, we staged the Electro-Magnetic Bon-Dance. The original purpose of the Bon Dance is to mourn the dead; here we extended its concept for the memorial service of electronics that have played a major role in economic growth. Elderlies who donated electronics came to see the concert; children fell in love with instruments, engineers who work at electric appliance companies were thrilled to create instruments.

Everybody is enjoying the project and is very surprised how daily items have been fantastically transformed. We dream and search for the answer to our question, what is the new folklore music of urban cities? We want to realize a festival that strongly contrasts with the efficiency and rationality of the AI era, to breathe life into trash that holds memories of someone, and to produce new instruments through ideas, fantasies and technology with many people. As a next step we wish to develop a new relationship between objects and the human spirit. We believe that this project has the potential to establish a new culture after the fetish for capitalism.

Promoter: Sony Music Artists, Topping East – nonprofit organization
Producer: Ryouichi Kiyomiya, Topping East – nonprofit organization
Ei Wada (JP) + Nicos Orchest-Lab (JP). Ei Wada, born in 1987, is an artist / a musician. When he was a child, Wada was convinced that there was a music festival waiting for him under the gigantic tower shaped like the crab legs embedded in tube TV. But when his friend told him that there was no such place on earth, the dream bubble burst. Then Wada decided to make the music festival himself. Nicos Orchest-Lab (JP). A project team was formed for ELECTRONICOS FANTASTICOS! (nickname: Nicos), which started in 2015. New members coming from diverse fields have since joined the project and they improvise and exchange fantasies, knowledge, and techniques on a regular basis.

What is the role of media art? Wada has been using old consumer electronic devices like CRT televisions, radios, rotary dial phones, camcorders, and more for his pieces. He begins by collecting these items at workshops, in collaboration with local communities. The process seems to revive all of these forgotten devices, transforming old into new. The end result is really cool techno music, sounds one never could have imagined by simply looking at the old gathered items from his workshop. Even more beautiful is the community that he creates around this movement, here everyone of all ages and backgrounds comes together (dressed proudly in the same border shirts) to form his supportive tribe. As it builds, the media art piece gains momentum and opens doors of how tech can work for communities, and offer experiences of life-changing processes and outcomes. ELECTRONICOS FANTASTICOS! represents one of the most important roles of media art: opening doors for everyone, and introducing them to new worlds that they have never before experienced.