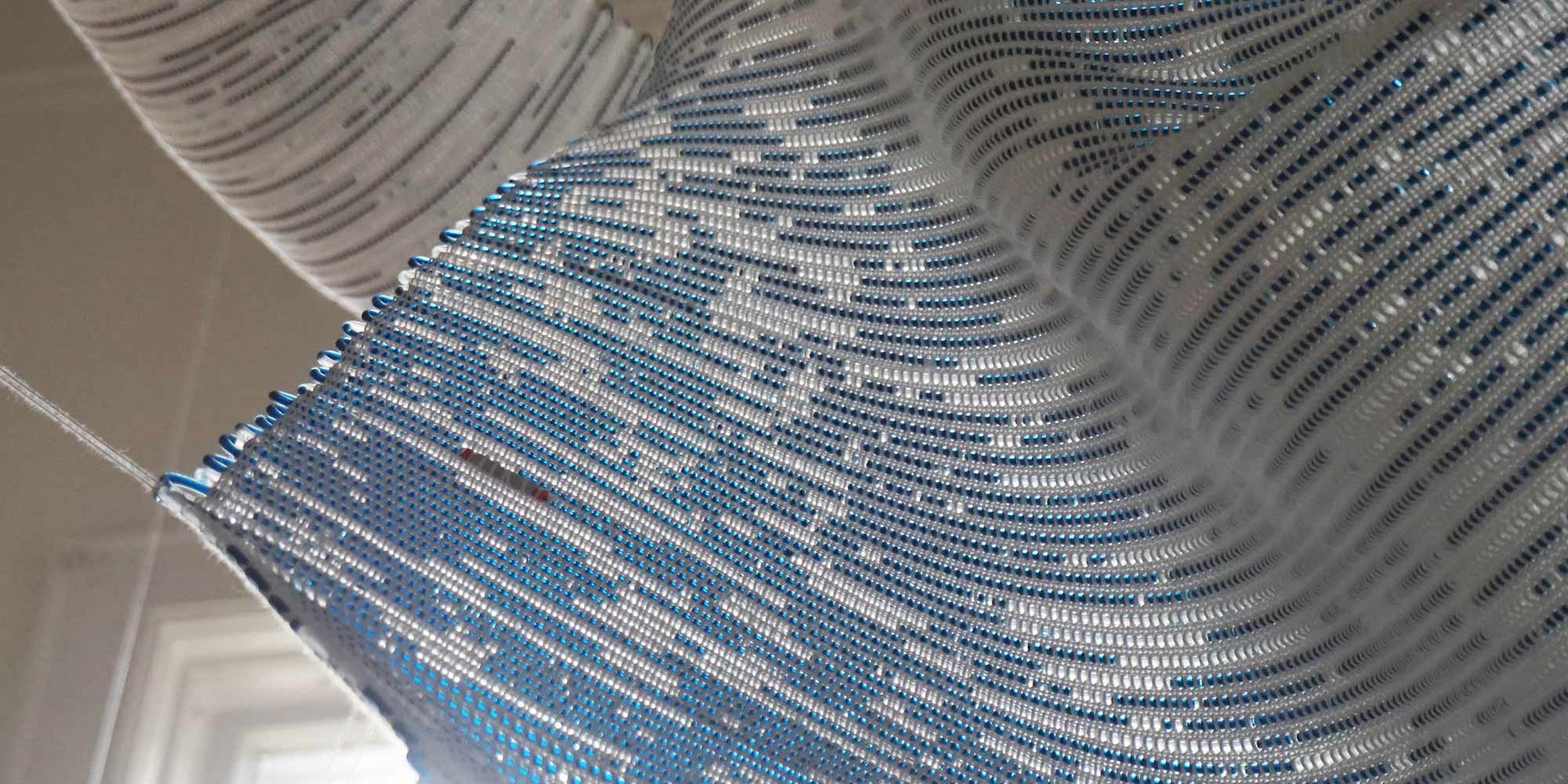 Full or empty; color or clear; zero or one; under or over – c o m p u t e r 1.0 imagines a display for the future, by looking at displays from our past. Artists Julian Goldman and Victoria Manganiello create a large-scale textile woven by hand using hollow polymer tubing and natural fiber thread. A patterned series of colored liquid/oil/air pixels will be pumped into the tubes in a sequence dictated by data from adjacent motion sensors and a series of computer-controlled valves, air compressors, and pumps. This textile will function as a lo-fi computer display, made with ancient natural materials and techniques juxtaposed with contemporary digital technologies.
In exhibition, the operating system is in the viewer’s initial observation; the technologies and the sounds they make are not hidden but are an integral part of the audience experience. We show the means of production, rather than hiding it.

c o m p u t e r 1.0 also functions as a historical lens showing how our relationship to computing technology has always been fraught with opposed promises of utopian and dystopian futures. In 1801, French master silk weaver Joseph Marie Jacquard developed a loom using punch cards (see binary code) to direct cloth weaving. It was an engine for the Industrial Revolution, creating cloth more cheaply and quickly while mechanizing the work of thousands of laborers across Europe. The Jacquard loom is a direct, though often forgotten, ancestor of our modern computers that directly led to discoveries by Charles Babbage, Ada Lovelace, Alan Turing and onwards to our new-found obsession with and addiction to digital display.
We represent this digital heritage with digitized cloth, recalling current topics of data, privacy, and equity surrounding our communication infrastructure. This installation reminds us that our current digital existentialism and the persistent question of “are we better off?” is a conversation two centuries in the making between Luddites and evangelists. 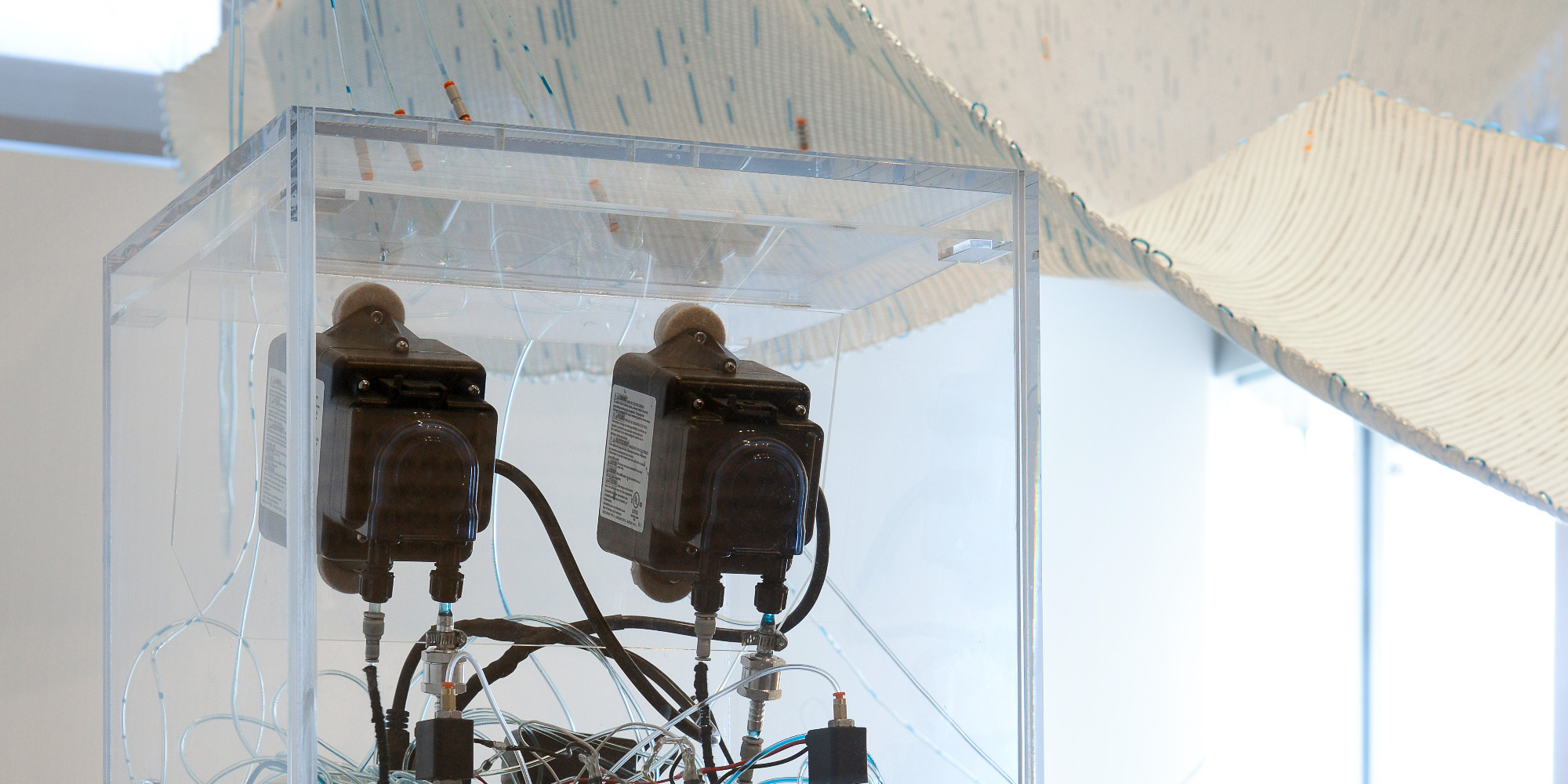 Julian Goldman (US), Victoria Manganiello (US) aka SOFT MONITOR. SOFT MONITOR is an art and design collective focused on telling stories of materials, technology, and culture through physical experience. Founded in 2017 by Victoria Manganiello and Julian Goldman, SOFT MONITOR’s recent projects include participation at the Wall Street Journal Future of Everything Festival (NY, NY), Currents New Media Festival (Santa Fe, NM), Indianapolis Museum of Contemporary Art (IN), and the Museum of Arts and Design (NY, NY). Julian is a lead designer at Bolt Threads, a bio-material company producing bio-engineered materials like spider-silk and mycelium-leather. Victoria is an award-winning textile artist and professor (New York University and Parsons), with multiple internationally recognized exhibitions, residencies, and awards under her belt.

computer 1.0 is a fascinating installation that is not only a beautiful art piece replicating an imaginary information processing device from the past but also a visually poetic testimony of the stressful dystopian future of the information age.
Victoria Manganiello and Julian Goldman create a canvas using polymer, natural threads, and flowing fluids to represent an analog display that portrays the flow of information but leaves room for comprehension by the observer to what the analog representation, which can also be interpreted either as being the process or the output, means. It is both an intellectual stimulus from a communication design angle and an antithesis to the rigid society that we live in; one that is controlled by zeros and ones and often brings limits to the imagination by the observer.
The artwork is an intimate crossover of tech and textile, and a reminder of how intellectual people of the past have ignited the evolution of communication, starting from a primitive form of design.