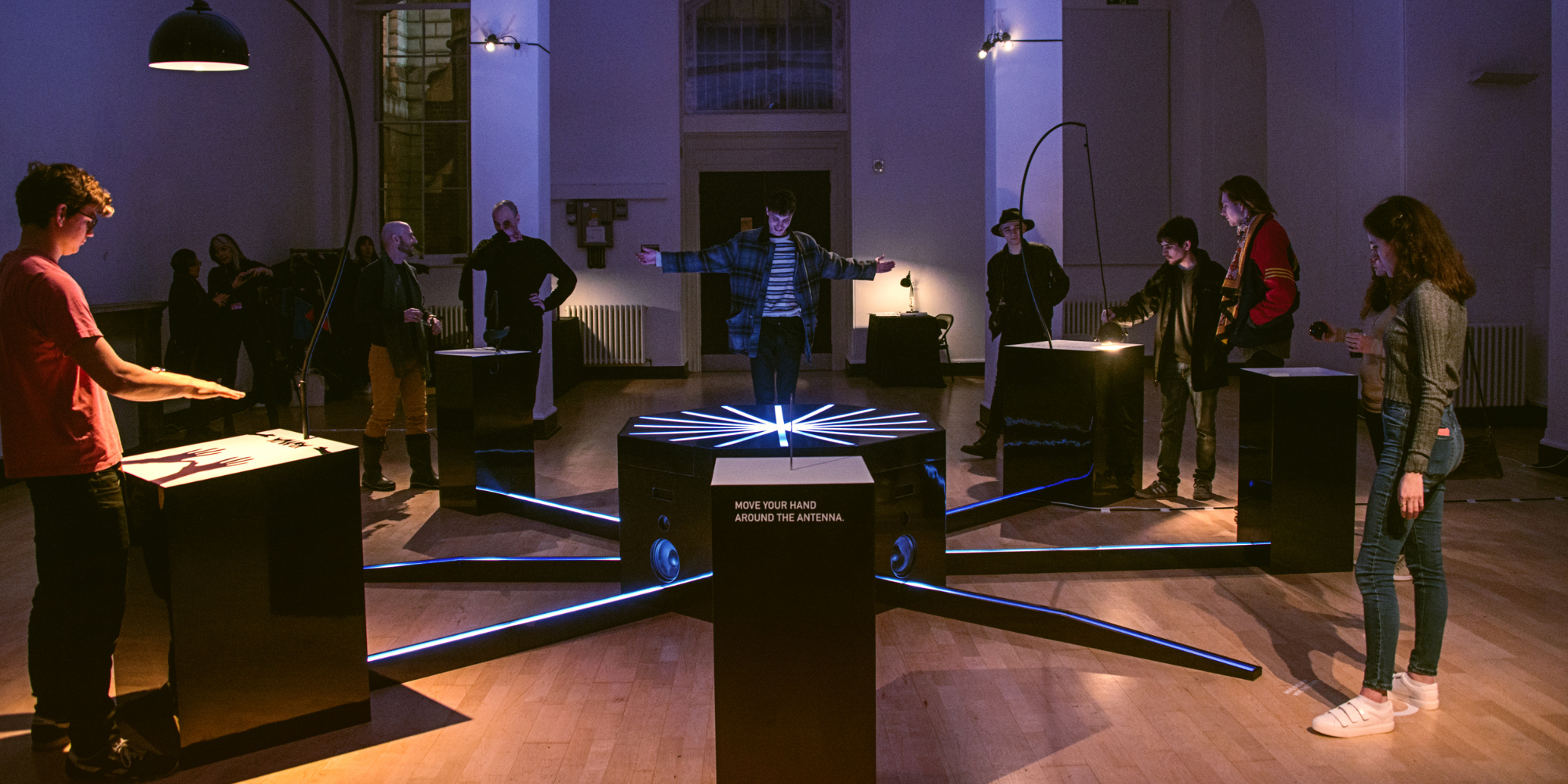 Cave of Sounds is a project connecting music’s prehistoric origins with the technological radicalism of the music hacker scene. It emerged from an open-ended process which I began in 2012 as composer in residence at Music Hackspace, London. I announced an open invitation to form a collective of musicians where each person would express their personal musical self by creating a new musical instrument. But these instruments would exist alongside each other, in the emerging ecosystem of the collective. In this way, we created a new kind of contemporary ensemble encapsulating non-hierarchical collective creativity. There was no selection process. After the first meeting, eight chose to remain. We worked through an experimental process of group improvisation, akin to a jam session for instrument builders, stretched over months and years. Every few weeks we met to experiment, listen, and discover what themes and ideas resonated. In 2018, we finalised the design and declared the project complete.

These eight instruments have no expert players and have never featured in a ‘performance.’ Instead, they are exhibited as an interactive sound installation, arranged in a circle around a luminescent hub. Visitors are invited to play the instruments freely without mediation or guidance. In this way they are simultaneously connected across time to the musical worlds of the instruments’ creators and across space to the other participants through a spontaneous act of musical play.

The musicologist Small argues that any musical ritual, from an orchestral recital to an illegal rave, serves to celebrate or reinforce a particular model of how society is sociopolitically organised. In this light, Cave of Sounds challenges the specialisation of creative expression within contemporary society, and, for many, the relegation of artistic experience to passive consumption. It embodies the human capacity for social organisation that emerges organically and without hierarchy.

Cave of Sounds was created by Tim Murray-Browne in collaboration with Dom Aversano, Susanna Garcia, Wallace Hobbes, Daniel Lopez, Tadeo Sendon, Panagiotis Tigas and Kacper Ziemianin. As the project developed, the production team of the original artists was expanded to include Terry Tyldesley, Anastasia Alekseeva, Harry Murdoch and Sets Appeal, which includes Hela Dondertman, Sophie Jacobs and Bridget Murton. Documentation films were created by Mind The Film and Anastasia Alekseeva.

Cave of Sounds was created through a Sound and Music Embedded residency with Music Hackspace and further developed using public funding by the National Lottery through Arts Council England with support from Music Hackspace, Somerset House Studios, and British Council.

Tim Murray-Browne is an artist and coder creating interactive installations. He uses technology to explore how we construct our sense of self through interactions with our environment and each other. He was London’s Music Hackspace’s first composer-in-residence through Sound and Music’s Embedded programme, during which period he initiated the Cave of Sounds project with seven other artists, musicians, technologists from Music Hackspace: Dom Aversano, Susanna Garcia, Wallace Hobbes, Daniel Lopez, Tadeo Sendon, Panagiotis Tigas, and Kacper Ziemianin.