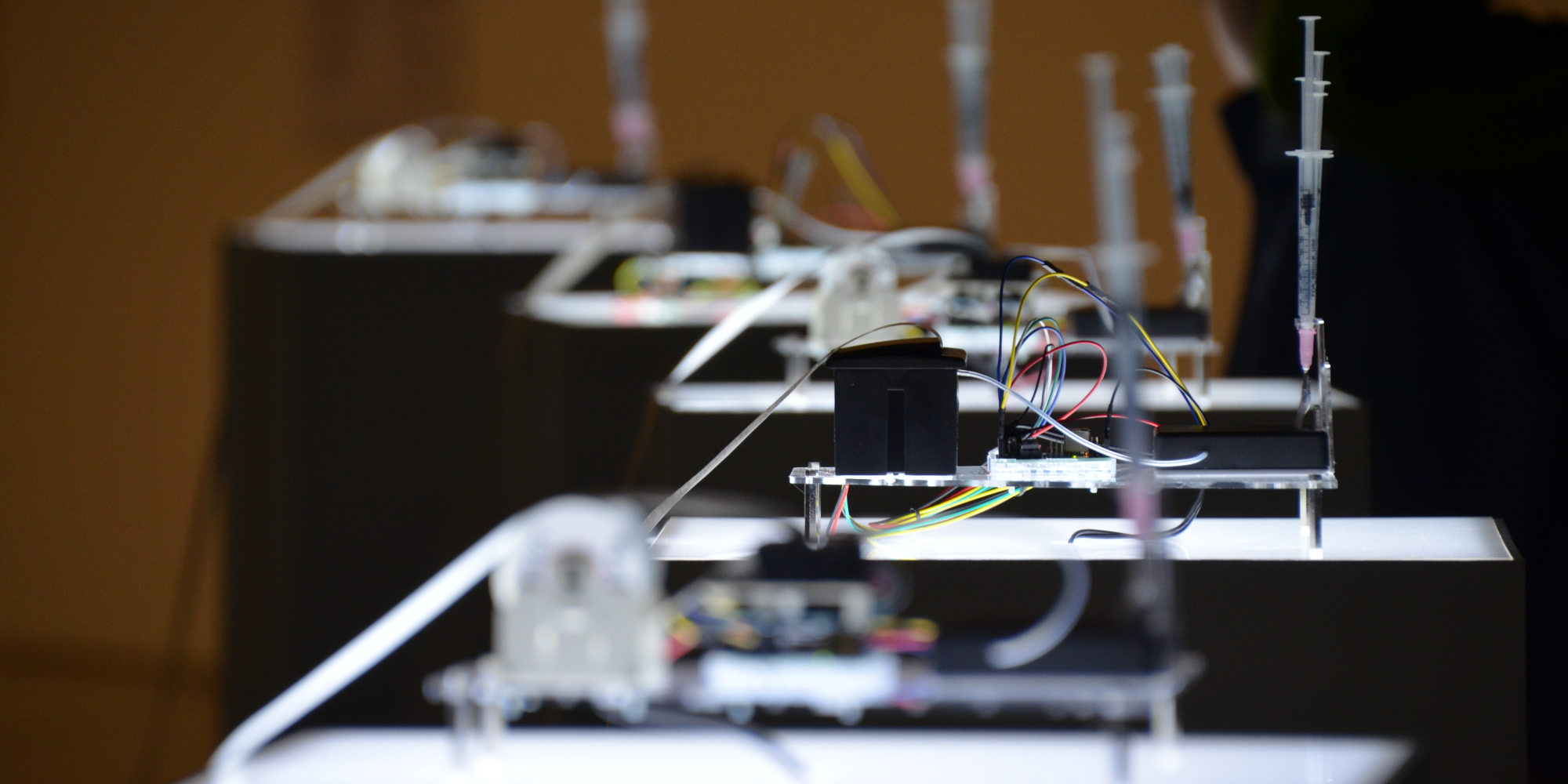 When a specific DNA sequence is ordered, the DNA information is sent to the company, the DNA is synthesised and returned in its physical form, ready to be used for biological experiments. This centralisation also has an intended side-effect: the companies act as censors, controlling which DNA is to be synthesised—and which not.

An unofficial ‘Black List’ of potentially harmful and forbidden DNA Sequences has been created and is shared amongst the companies—officially for bio-security reasons.
Because of the expensive chemicals involved in the process, it was not really feasible to create a DIY DNA Synthesiser—until now. DIY microfluidics make the process possible and more affordable. But it is still error-prone and creates mutations in the physical DNA sequences.

The physical DNA is outputted within water droplets, which are embedded and dried on paper, which not only acts as a storage medium for the digital information of the DNA, but also stores the actual, physical DNA. DNA is continuously synthesized, printed, and archived on the paper, creating a pool of forbidden DNA sequences—but most of them will not be printed perfectly—they will have errors and mutations.

The process of printing black-listed DNA Sequences also creates a moral and societal dilemma:
— Do we actually want to give everyone the ability to print ‘forbidden’ DNA?
— Should we stop DIY DNA Synthesisers in the name of biosafety?
— Can we stop them?

Or do we need to put our trust in artists, hackers, and researchers, that they don’t realise the bad dreams of biotechnology, but focus instead on the good dreams?

BCL – Georg Tremmel and Shiho Fukuhara.
Georg Tremmel has a background in Media Art, Computer Science and Biology, he studied at the University of Applied Art in Vienna and at the Royal College of Art in London, where he started his ongoing collaboration with Shiho Fukuhara. He is also a Researcher at the University of Tokyo’s Laboratory of DNA Information Analysis, a Visiting Researcher at the metaPhorest Research Group, and the founder of the BioClub Tokyo.
Shiho Fukuhara studied Fine Art at Central St. Martins and holds an MA in Interaction Design from the Royal College of Art. She was Artist-in-Residence at the Palais de Tokyo in Paris and at IAMAS in Gifu, Japan. They formed the Artistic Research Framework BCL as an homage to Heinz von Foerster’s Biological Computer Laboratory, to continue the mission to explore the relations, congruences, and differences of biological and cultural codecs through artistic interventions and social research.

Foucault’s concept of Biopolitics—how regimes of authority manage our bodies to achieve control—is disturbingly reimagined in BLP-2000 / Black List Printer. BCL’s project asks us to consider a plausible biotechnological future in which an unofficial “Black List” of potentially harmful and forbidden DNA sequences has been created and shared among companies for bio-security reasons. The output of this project is a never-ending printing machine that stores and chronicles DNA sequences that companies might label as harmful and forbidden. The jury noted that while the project is a powerful and poetic reminder of the ethical dangers that are inherent to the development of new biotechnological tools, its means of production—a DIY DNA Synthesiser and hackable processes—reveal a great sense of potential socio-political strength.