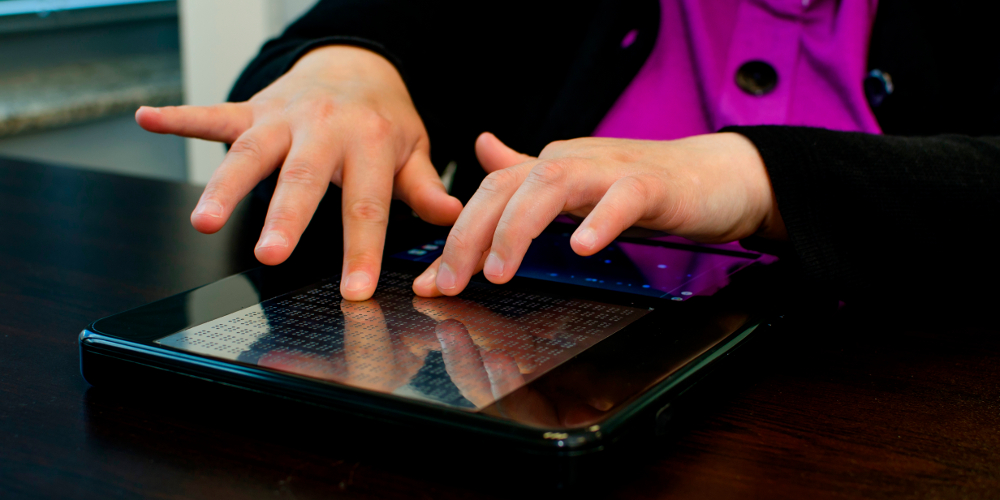 BLITAB® is the world’s first tactile tablet for blind and visually impaired people. It is the first ever Braille tablet using an innovative actuating technology to create tactile text and graphics in realtime. The invention is ‘smart tactile technology’ that can also be used in various products and smart body applications.

BLITAB® is the first tablet that allows blind and visually impaired users to learn, work, and play with one mobile device, to have digital access to information in real-time. BLITAB® converts any document into Braille text. Tixels (tactile pixels) immediately appear and disappear as the text changes. Worldwide there are more than 285 million blind and visually impaired people, a number expected to double by 2020 (WHO, 2012). Only 1% of all published books are available in Braille, the traditional tool for literacy and education of blind people. There is a correlation of 0.9 between being a Braille user and being employed. In the developed world, over 75% of the blind and visually impaired population of working age are unemployed. For those with visual impairment, enabling print reading with Braille makes the difference between employability and educational achievement.

Inspired by a blind friend, in late 2014 we established our innovative start-up company BLITAB® Technology GmbH in Vienna, and later developed together with our team a novel liquid-based technology to create tactile relief outputting Braille, graphics, and maps on a newly designed tablet. In the last 12 months, we scaled the technology and thus produced the world’s first tactile display without any mechanical elements. Then we embedded it into a functional device called BLITAB®.

In 2015, we were part of two national funding programs in Austria (“departure pioneer” by Wirtschaftsagentur Wien and AWS Austria “Impulse XS”) as well as some national grants for social startups. In 2016, BLITAB® was part of the EU Accelerator CreatiFI Call1 and Call2.

Kristina Tsvetanova (BG), CEO and co-founder, graduated from the Technical University of Sofia. She has experience in Supply Chain Management and Industrial Engineering at international companies and is an innovation consultant to the G7 in the field of Technology, Research & Innovation. She is a highly acclaimed social entrepreneur—European Winner of Social Entrepreneurship and Disability (2015) and winner of the EU Prize for Women Innovators under 30 (2017). Accomplishments in Europe, USA, Mexico, Singapore, China, and Japan, and her efforts to empower unprivileged children via tech, make her one of The Social Movers of the day (Agora+D).

Slavi Slavev (BG), CTO and co-founder, has a solid background in Business Informatics and Smart materials. He has 7+ years of experience in commercial and business IoT, IT Innovations, and software development and design. With a focus on innovative IT products, he is always thinking at least four products ahead of current development. He is responsible for the technical development and prototyping of BLITAB®. Slavi is also actively in charge of production and distribution strategy of the company with the goal of material and waste optimization.

The temptation when talking about digital technology is often to focus on its visual aspects—not only the transfer of images, but also the aesthetics of digital tools. A world away from the dull, metallic minimalism that dominates tech design, the BLITAB offers an alternative view. Invisible to the uninitiated eye, the beauty of this niche product is the result of thoughtful, functional technology that can truly improve people’s lives. In our image-obsessed world, the needs and special abilities of visually impaired people are often neglected when it comes to digital experiences. Using unique technology to create a textured display, the BLITAB transforms text and graphics into legible bubbles. Thanks to this cutting-edge device, which translates text into “smart braille” in real time, the pleasure and usefulness of reading online can be accessible even to those who cannot see clearly. When imagining an audience for technological creations, the jury agrees that the focus should be on humanity rather than on customers.