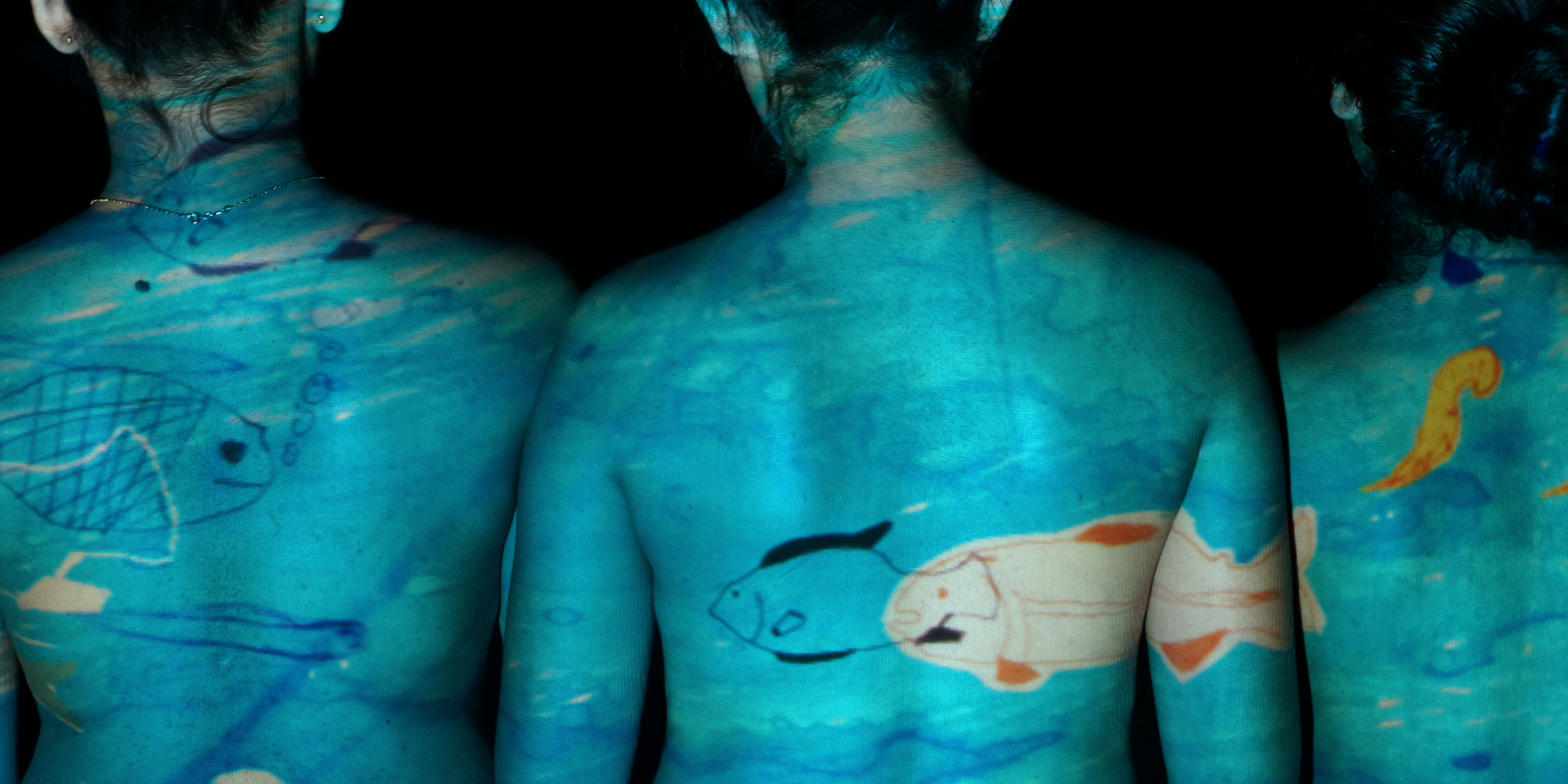 The Arte Eletrônica Indígena (AEI) project was designed and executed by the NGO Thydêwá. It consisted of a series of ten short artistic residencies in indigenous communities in the Brazilian Northeast in order to cocreate works of electronic art. These were exhibited to the public at the Museum of Modern Art, Salvador da Bahia, in August 2018 and have since toured the indigenous communities themselves.
The participating artists came from Brazil, Boliva, and the United Kingdom, and the indigenous communities are those that make up the network of indigenous “points of culture” with which the NGO works. The purpose of the project was to stimulate intercultural exchange through artistic cocreation between indigenous and non-indigenous people, to reduce prejudices on all sides through collaboration, and to challenge mainstream perceptions of indigenous peoples as “traditional” or “backward”, and therefore not capable of engaging with new, high-tech forms of art.
The resultant artworks marry the concerns and practices of the indigenous communities with electronic and digital technologies to produce highly original results. The strong interactive dimension to many of the works demands that the spectator engage with them, thus breaking down prejudices in the gallery setting also.
Three of the most engaging works of electronic art presented were:
The Earth that is Us, Bruno Gomes and the Karapotó Plak-ô community, digital body painting.
The Voice of the Sea, Óscar Octavio “Ukumari” and the Pataxó de Barra Velha community, electronic sound art with found materials.
Pulsation, Aruma – Sandra de Berduccy and the Camacã Imboré/Tupinambá community, electronic textile art.

The AEI project was designed by the NGO Thydêwá.

Thydêwá is a non-governmental organization that runs programs, projects and campaigns to raise awareness of discrimination against indigenous people and promote a culture of peace. It was founded in 2002 by indigenous people from different ethnic groups in the Brazilian Northeast working together with non-indigenous people. Thydêwá uses intercultural dialogue to promote dignity and wellbeing for all. It has also garnered a very strong track record for encouraging critical appropriation of new technologies by indigenous communities, particularly through the ethnojournalist platform Indios Online, set up in 2004.

The jury found this initiative to be a strong example of partnerships that center the voices of indigenous communities and amplify their perspectives as part of contemporary identity and collective heritage. Indigenous people are among the front-line stewards of the environment and their continual contributions to modern cultural and ecological systems are critical inputs for innovation. In hopes of further supporting these peoples’ roles in the innovation ecosystem, Arte Eletrônica Indígena demonstrates best practices for creative capacity building in rural indigenous communities.

Bruno Gomes, Karapotó Plak-ô Indigenous community, Alagoas (BR): The Earth that Is Us

This project sought to extend the concept of body painting with the use of technology in order to open the door to new experiences and new conversations. In one iteration of the project, Indigenous participants first drew the elements present in their natural environment and then animated and projected them onto their bodies, making a video of the results. In another they performed live digital body painting using drawing tablets. When present at the exhibition of their work, they also encourage interaction with the public by projecting Indigenous motifs for people to have their photos taken with and subsequently upload to the project Instagram account. 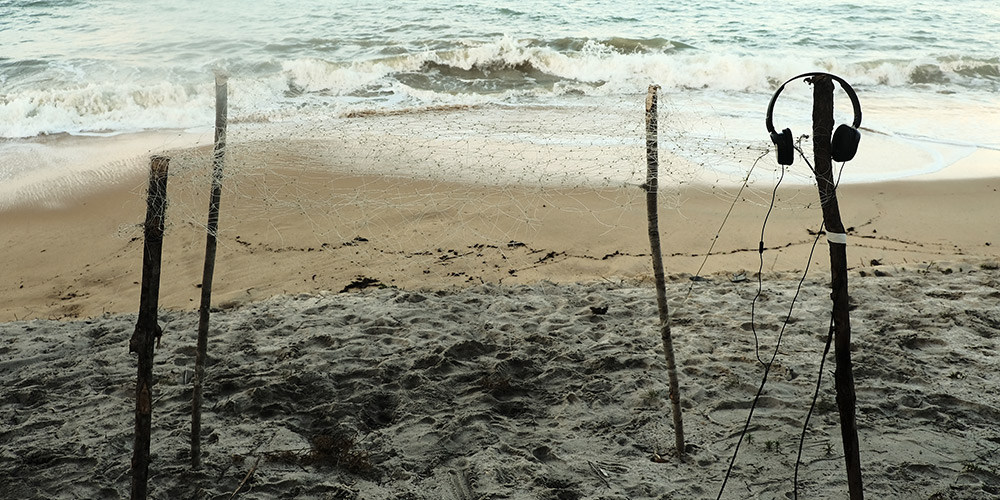 This installation is a contact-sensitive fishing net that can be “played” to evoke a sonic landscape. It is made out of a fishing net found abandoned on the seashore during Ukumari’s residency in the Pataxó de Barra Velha Indigenous community and has been adapted to function as an electronic musical instrument that offers a poetic means of getting to the “heart” of the Pataxó community. The eerie “underwater” music that it makes when visitors interact with it is a response to the fact that the word Pataxó (pronounced pa-ta-show) is an onomatopoeia for the sound of the waves breaking on the shore. Thus the sonic landscape transports visitors to the Pataxó community, its natural environment and its culture.

The three textile works that comprise Pulsation combine traditional knowledge, processes and materials such as reeds, thread and feathers, with unusual materials such as fiber-optic cable and LEDs to offer a poetic approach to Indigenous culture. In Tupã, for example, Selma crocheted with fiber optic cable to write the word Tupã, the name of the “great spirit” for Indigenous people in Brazil. Tupã is considered to be the creator of the universe, and more specifically the creator of light. It is also the onomatopoeic sound of the heart beating: Tu-pã – Tu-pã … You can place your ring finger – also known as your heart finger – in the pulse sensor to experience the installation.

This project brings to attention the cultural symbols and creative output of eight indigenous villages in the Brazilian state of Bahia through supporting their close collaborations with artists from Brazil, Bolivia, and the UK. The jury recognized the importance of the impetus for this intercultural partnership coming from the non-governmental organization Thydêwá, a group of intercultural individuals that has been working closely with these communities for 17 years to promote positive social transformation. The dialogue created by these art residencies presents a powerful counter-narrative around and a show of meaningful resistance to the traditional integration-focused programs that all too often attempt to homogenize the artistic traditions and productions of historically-marginalized peoples. By incorporating digital tools into new creative formats, the residencies situate electronic art as a compelling medium for collaborative creative processes and proposes the crucial role indigenous people can and should play in the continued development of the global technological ecosystem. This multi-layered artistic engagement urges meaningful dialogues around the practical uses of technology to activate collaborative creative processes—and this can enrich digital practices for all.