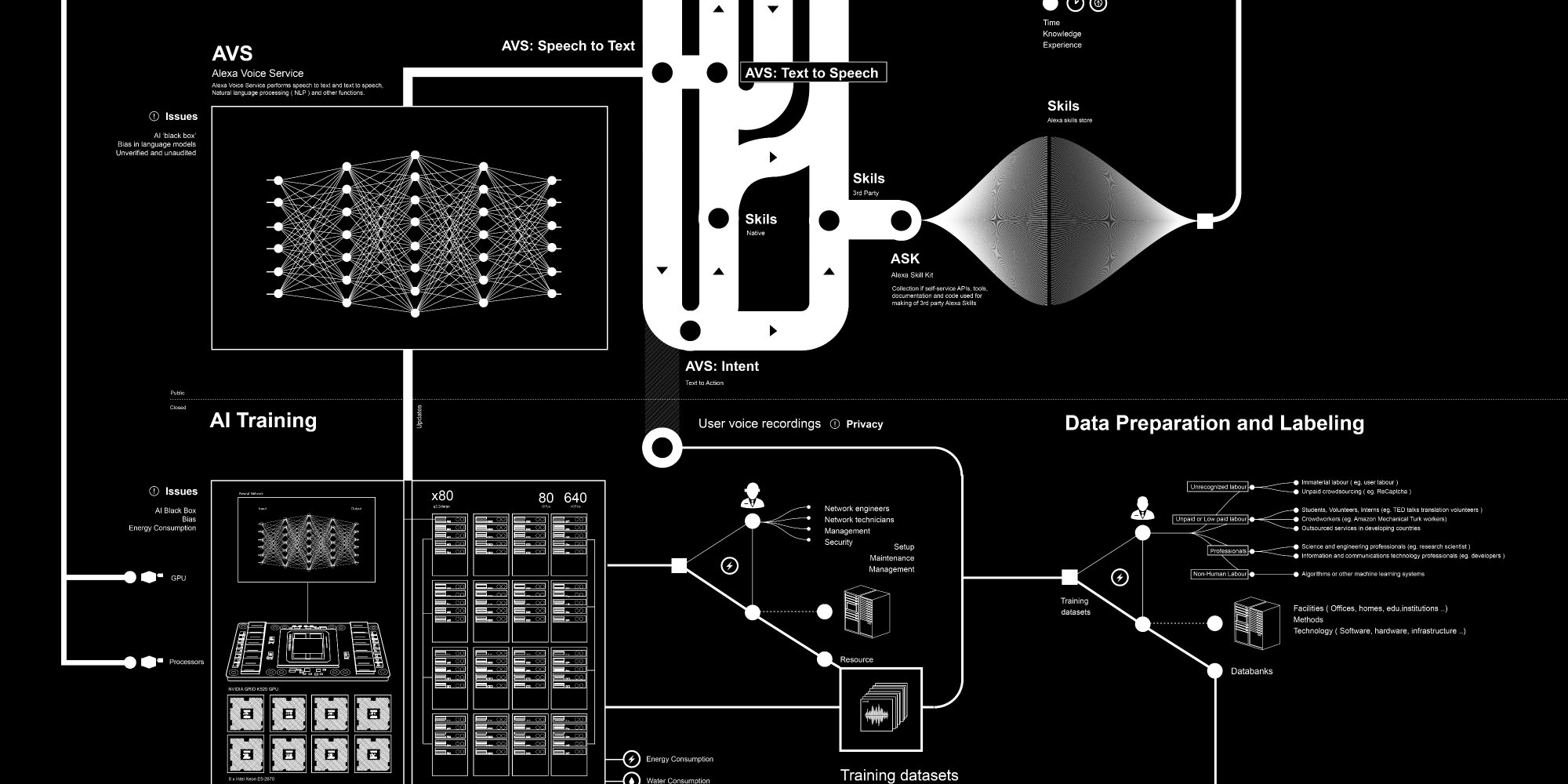 Anatomy of an AI System is a large-scale map and long-form essay investigating the human labor, data, and planetary resources required to build and operate an Amazon Echo. The exploded view diagram combines and visualizes three central, extractive processes that are required to run a large-scale artificial intelligence system: material resources, human labor, and data. The map and essay consider these three elements across time—represented as a visual description of the birth, life, and death of a single Amazon Echo unit.
At this moment in the 21st century, we see a new form of extractivism that is well underway: one that reaches into the furthest corners of the biosphere and the deepest layers of human cognitive and affective being. Many of the assumptions about human life made by machine learning systems are narrow, normative, and laden with error. Yet they are inscribing and building those assumptions into a new world, and will increasingly play a role in how opportunities, wealth, and knowledge are distributed.
The stack that is required to interact with an Amazon Echo goes well beyond the multi-layered ‘technical stack’ of data modeling, hardware, servers, and networks. The full stack reaches much further into capital, labor, and nature, and demands an enormous amount of each. The true costs of these systems—social, environmental, economic, and political—remain hidden and may stay that way for some time.
We offer up this map and essay as a way to begin seeing across a wider range of system extractions. The scale required to build artificial intelligence systems is too complex, too obscured by intellectual property law, and too mired in logistical complexity to fully comprehend in the moment.

Kate Crawford is a widely-published researcher, academic, and author who has spent over a decade studying large-scale data systems, machine learning and artificial intelligence. She is the co-founder and co-director of the AI Now Institute at NYU, which conducts research on the social implications of artificial intelligence. She is a Distinguished Research Professor at New York University, and a Principal Researcher at Microsoft Research New York. In 2016, she co-chaired the Obama White House symposium on the social and economic implications of AI. She has published in many academic journals and advised policy makers at the European Commission, the United Nations, the Federal Trade Commission, and the City of New York. In 2018, she was selected for a Richard von Weizsäcker Fellowship at the Robert Bosch Academy in Berlin.

Vladan Joler is SHARE Foundation founder and professor at the New Media department of the University of Novi Sad. He is leading SHARE Lab, a research and data investigation lab for exploring different technical and social aspects of algorithmic transparency, digital labor exploitation, invisible infrastructures, black boxes, and many other contemporary phenomena on the intersection between technology and society.

A leading political axiom of our time is that the future will belong to those that best harness the technologies of Artificial Intelligence. The Anatomy of an AI System hopes to construct a different path. In this collaboration between Kate Crawford, a world-leading AI researcher from New York University’s AI Now Institute, and Vladan Joler, an artist from the SHARE foundation, digital AI assistant technologies such as the Amazon Echo are exposed as new forms of extractivism, whose immediate reliance on human cognitive and affective labor extend into questions around capital, physical labor, and even the natural world. And how, despite their growing ubiquity, the ultimate social, environmental, economic, and political costs of these technologies still remain unknown.

AI is already employed in ways that exacerbate inequality and increasingly threaten global democracies. Yet it also represents one of humanity’s greatest opportunities to solve acute epochal challenges such as climate change and equitable access to healthcare. Despite the palpable fact that artificial Intelligence is already deeply shaping our societies and fundamentally changing the human experience, it has been until now largely developed and deployed by private companies without public awareness or consent, and shielded from collective view as a form of “intellectual property.” Through its minutely-detailed high-resolution map, the Anatomy of an AI System allows us a more panoramic view of the diverse range of system extractions intrinsic to the current applications of this technology. Through this, we are urged to grapple with the ethical, legal, social, and economic implications of the current uses of AI and how we might in turn develop and deploy new forms of artificial intelligence in which the sources and later applications of these powerful algorithms might remain open and just.