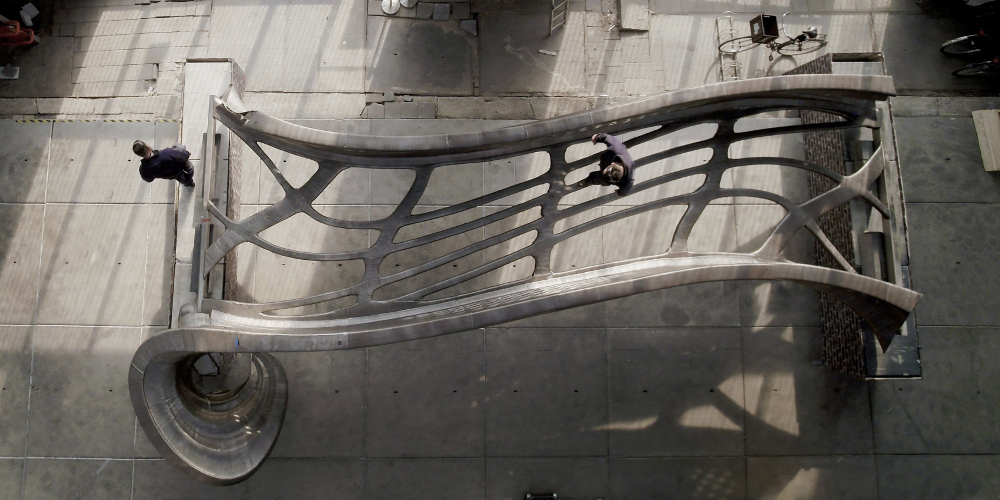 Grand Prize – Innovative Collaboration: Awarded for innovative collaboration between industry or technology and the arts (and the cultural and creative sectors in general) that open new pathways for innovation.

The project’s most iconic image shows robots autonomously printing a steel bridge over a canal. The MX3D bridge project thus started as a visionary moonshot project, an artist’s dream.

Several years later that dream has been solidified in the 3D printed stainless steel bridge. This fully functional pedestrian bridge for the city center of Amsterdam will be completed in 2018, to be placed at its final location soon after.

The bridge will also be rigged with a sensor system, allowing our team of data centric engineers to generate data on the structural behavior which will inform a digital twin.  That twin will help to evolve the initial form language into a truly novel digital aesthetics.

The bridge offers the ultimate proof we can now print large, beautiful, and intelligently designed structures in metals. It turned out that visualizing how this technology could impact our future was the missing link as the project easily mobilized scientists, companies, and citizens around this shared dream.

For the team of printers, material scientists, Erasmus scholarships, engineers, and city officials the bridge project became a playground, allowing for unconstraint tinkering on the introduction of these types of technology in a city environment.

Designed by Joris Laarman Lab, the bridge serves as a metaphor, aesthetically connecting ancient Amsterdam to a new age of possibilities. The artistic drive of the Lab was the fundament of this project, which inspired the innovative collaboration that was needed to realize the project.

The frame of the bridge consists of 8mm thick tubes. In the handrail, which is part of the construction, two 3 mm plates regularly connect, creating a strong ‘waffle’ structure. As the two bridge heads are not perfectly aligned, the bridge curls towards the other side in an S-shape. The force lines created by this shape dominate the structure, both structurally and visually.

How it all began

The first MX3D piece was a 2 x 4 x 1.5-meter sculpture designed by Joris Laarman, the Dragon Bench. This proved that it was now possible to 3D print metals on a scale previously unthinkable. Fantasizing further on the potential applications, MX3D created a bridge design concept.

This project is a collaboration by MX3D and Joris Laarman Lab.

MX3D (Amsterdam, 2015) is led by CEO Gijs van der Velden and CTO Tim Geurtjens. It is  a spinout company originating from the renowned Joris Laarman Lab. The company develops (mobile) 3D large scale printing solutions. Its robotic metal printing technique allowed for the introduction of all the creative and practical advantages of 3D printing to entirely new industries like architecture and engineering. Initially the company inspired the tech community by sharing their early experiment on social media. The ecosystem created by this open attitude towards innovation formed the breeding ground for the innovative collaboration needed to construct the Bridge project. The company has recently announced its collaboration with a bridge builder in the Netherlands and will supply its technology to several other industries within the next years.

Joris Laarman Lab (Amsterdam, 2004) is an experimental playground set up to study and shape the future. It tinkers with craftsmen, scientists, and engineers with upcoming technology and its consequential esthetics. The lab was started in 2004 by Joris Laarman and filmmaker Anita Star. Joris attended the Design Academy Eindhoven in 1998 and graduated cum laude in 2003. Anita studied film at the UVA in Amsterdam. The lab first gained notoriety with the Reinventing Functionality project, which included functional rococo radiator Heatwave that was picked up by Droogdesign and is now produced by Jaga. Joris Laarman Lab has over 70 works in 37 museums like the MoMA, V&A, Centre Pompidou, and recently the Rijksmuseum Amsterdam where the Bone Chair is exhibited. In 2011 Joris Laarman received an “Innovator of the Year” award by The Wall Street Journal and in 2016 the Amsterdam Art Prize. In November 2015 an extensive solo exhibition of the experimental work initiated by the Groninger Museum was visited by more than 200,000 visitors and started travelling around the world.

Designing for 3D-printing opens up a whole new world of complex forms and shapes previously impossible with traditional techniques, says Tim Geurtjens, co-founder and CTO at Dutch design studio MX3D. The jury found their 3D-printed metal bridge a really important marker for the future of architecture and construction. The bridge was designed for one of the canals in Amsterdam’s Red Light District, by Joris Laarman Lab. Architects working in this area are convinced it won’t be long before additive manufacturing transforms their discipline. This opens up all sorts of new aesthetic possibilities. Traditional steel or concrete structures have a high level of redundancy—material that doesn’t need to be there, but which is too difficult or expensive to remove. But 3D-printing allows material to be placed only where it is required. This project is not only great in engineering and design but also generates discussion about the future of design and construction. Robotic arms are getting more sophisticated by the day and can be used to print in traditional materials, such as plastic, concrete, or composites, or employed to weave or knit three-dimensional fiber structures.  The bridge is 12 meters long and 6 meters wide, and will be installed in the old city center of Amsterdam across a canal, early next year. The project innovates the type of materials and the techniques used and presents a new kind of open collaboration amongst MX3D engineers, Amsterdam city officials, scientists at Arup, and Imperial College London to define data-driven algorithmic methods for evaluating the safety of the bridge and enabling the bridge to interpret its environment. Sensor data will feed into a “digital twin” of the bridge, creating an algorithmic model that responds to the data in real time. This is the beginning of a great urban transformation. There are many large-scale 3D-printing projects happening all round the world but this project has built something that works for people living in a large European city and is leading the way.