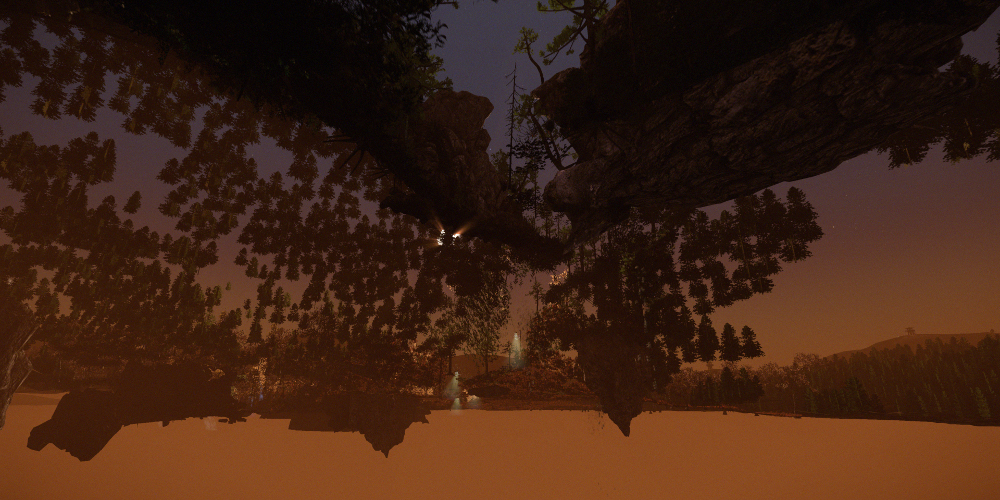 489 Years shows an animated landscape of the Demilitarized Zone between North and South Korea, based on the narration of a former soldier who had entered the DMZ­–one of the most dangerous and heavily armed places in the world. Since only authorized personnel can enter the DMZ, Hayoun Kwon uses animation as a medium to reconstruct the space that plays on the fiction and the fantasy of a forbidden territory, providing an indirect experience for the viewer.

The former soldier featured in 489 Years tells Hayoun Kwon various stories of his experiences in the DMZ. Among his many accounts, the artist was touched by his story of the landmines and flowers, realizing that she wanted the viewer to experience the DMZ as a paradoxical place where intense anxiety and subliminal beauty coexist. In creating her imagined landscape, Hayoun Kwon addresses the geopolitical realities of the peninsular division, its violence and projected images of this mythical space.

Originally shown through a Virtual Reality device, artificial interventions and fictional constructions enable the artist to film what cannot otherwise be shown. Animation affords her the freedom to theatricalize, exaggerate, and push the frontiers of representation, and even to exploit the fantasmatic potential of her subjects. Reflecting on identity and the notion of the border, Hayoun Kwon interrogates the construction of individual and historical memory, as well as the ambiguous relationship of both to reality and fiction. Offering the viewer an entrance into the DMZ, Hayoun Kwon‘s work leads the viewer to experience the DMZ through human emotions of anxiety and wonder.

Hayoun Kwon (KR), born in 1981, is a multimedia artist and documentary director. She graduated from Le Fresnoy – Studio national des arts contemporains in 2011 and she lives and works in France and in Korea. Her films Village Model (2014) and 489 Years (2016) have received several awards and been shown at a number of film festivals including Ars Electronica 2018. The reflection on identity and borders is central to her previous works. She has focused more specifically on the construction of historical and individual memory and their ambivalent relationship to reality and fiction.

489 Years is located in the demilitarized zone (DMZ) between North and South Korea—a dangerous place filled with unmapped landmines and hidden from media coverage. This highly relevant topic became even more so in the time between the jury deliberations and the present. In this interactive VR piece, the viewer approaches, enters, and experiences the DMZ through the eyes and memories of a South Korean soldier. First-person perspective is key to the engaging qualities of the piece and VR technology is used successfully by the artist to enhance immersion in the subject in deeply moving ways. Rather than approaching this space as a mere zone of war, the narrator speaks about the redemptive qualities of the beauty of its untouched natural state. By attracting attention to the silent force of nature in the landmine-filled DMZ, Kwon creates an atmosphere of discomfort for the viewer. Her poetic approach to this difficult problem reverberates a surreal atmosphere which is highly pertinent to the current state of affairs. The jury felt that this experience brings humanity and empathy to a very sensitive topic that is frequently misunderstood or lost in political discourse.