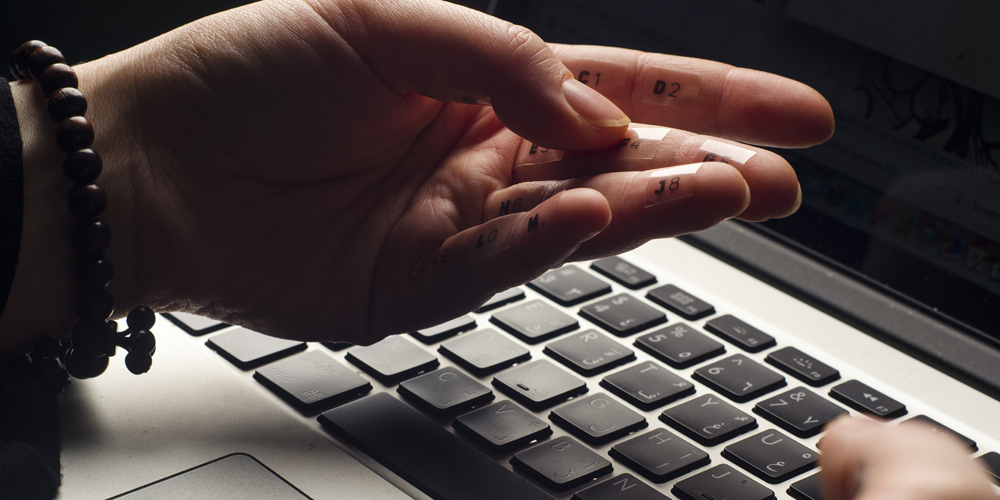 Text messaging technology in the early days was only available in the characters of the Latin alphabet. Arabs struggled to use the English keyboard in their daily texting communication. So they created their own system, which allowed them to write Arabic sentences using Latin letters. They added the numbers to the alphabets to represent phonetics that only existed in the Arabic script. For instance, “3” in 3arabizi represents the letter “t” (Ain). The system became part of youth pop culture in the MENA region, and it is now embedded in their everyday activities. Some call it “3arabizi” others call it “Franco­Arabic”.

3arabizi is an Arabic chat language used for texting or writing in Arabic. The users don’t speak the language, they simply use their hands and fingers to communicate in it on different platforms. In the process the designer found connections between this system and how Muslims use their hands and fingers gestures as a method to keep track of their prayers in the Zikr remembrance of God ceremony. They use either the tip of their finger to count the finger joints 99 times or a string of beads Misbaha / Sibha, which is a unique counting system. A system was designed to use this counting system, to appropriate the English keyboard to reflect the MENA context, to question globalization and to show the significance of finding the right methods to adapt globalized systems to a specific culture.

The project is still in its conceptual phase. The concept and the research phase developed in 2014 and I started to speak at different conferences and wrote an academic paper to develop the concept and work on the technical part in 2015. As I am not a developer or an engineer, it’s taking time to go through the whole process of production.

Hadeer Omar (EG) is a visual communicator, independent filmmaker, and an entrepreneur with a Bachelor of Fine Arts in Graphic Design and a Master of Fine Arts in Design Studies from Virginia Commonwealth University in Qatar. Currently, she is working as a Teacher Assistant at the Art Foundation Department at VCUQatar. In 2012 Omar founded Kroki Design Studio, an online studio. Her training experience gives her the unique ability to apply design thinking–in all its forms–to visual processes. Her graphics process knowledge and experience cover commercials, social design, photography, film, digital art, and mixed media. She expresses her identity  through her work and enjoys manipulating mediums to emphasize the story behind each artwork.

Although this work is still at the conceptual phase, the jury was impressed by its unique message that technology could empower diversity and ethnicity. Instead of pushing the global standard, it reminds us of the importance to observe how local people interact and design services that will allow for differences in each region, country, and culture. It would benefit many to further develop these kinds of ideas that promote respect and the recognition of diversity while opening up venues for new hybrid communication systems (to emerge).